A Russian-born Tajik MMA fighter living in Guam has been arrested for murder, after allegedly stabbing a doctor following an argument over the COVID-19 vaccine.

Akmal Khozhiev, a 3-1 mixed martial artist who last competed in March of 2020 at an event titled Brawl in Tamuning, Guam, was picked up by police on November 6 following a stabbing at his apartment. He has been charged with Aggravated Murder and Aggravated Assault, Use of a Deadly Weapon in the Commission of a Felony, Strangulation, Felonious Restraint, Assault, as well as Family Violence.

According to a report by the Guam Daily Post, citing a witness to the incident, Khoziev and Dr. Miran Ribati, a radiologist, began arguing over COVID-19 vaccinations during a dinner. That lead to the fighter known as “AK” to tell the doctor that “I don’t trust you anymore.”

Khoziev proceeded to choke the doctor, until the witness intervened. The fighter then obtained a bone left over from the meal, which he used to stab Ribati repeatedly in the neck.

Ribati tried to escape, only to suffer additional stab wounds from a knife. The witness was struck about the head during the altercation. In the end, Ribati was left lying face down in a pool of his own blood. When police arrived on the scene, he reportedly told an officer “Sir, it’s me, it’s me, I killed him.”

Tragically, Khoziev’s former teammates had warned that something was off about the fighter. JJ Ambrose, a Bellator MMA and KOTC veteran who recently competed against UFC alum Spike Carlyle under the Cage Warriors banner, owned the gym, Steel Athletics, where Khoziev trained, and employed him for a time.

“He was such a great person up until he wasn’t,” Ambrose told KUAM News. “We did everything we possibly could to warn people that AK wasn’t AK anymore.” His wife, Francesca, added “He was not the guy that everyone knew from around the gym anymore.”

The victim also trained at Steel Athletics, which Khoziev was fired from several months ago for threatening customers. “Miran was like the one guy that was supporting him,” Ambrose stated. “Such a great person, he was a doctor and he was always in the gym working out and taking care of his health and fitness. He was one of those doctors that leads from the front so to hear about him being the victim it’s a shocker.”

Updated 11/16/2021 to note Khoziev is Tajik but born in/represented Russia. 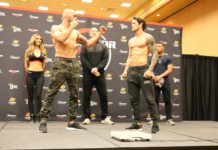 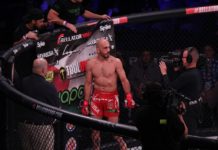