Kicking off the card hours earlier was a light heavyweight pairing. That saw two raw talents in the 205lb division face off, as Kennedy Nzechukwu took on Da Un Jung.

Both fighters had gotten off to promising starts to their Ultimate Fighting Championship careers, with three wins apiece.

Saturday’s card opener started out at a measured if not slow pace, both men trading lone shots. Nzechukwu kept a tight guard, hands high, covering up; Jung worked his jab while Kennedy relied on his left hand. Jung soon turned up the power, mixing punches and elbows, backing Nzechukwu up to the fence. There, he unleashed some nasty standing elbows that had Nzechukwu slumping over, before going out completely! The ref came in for the save, and that was it.

For South Korea’s Da Un Jung, he remains undefeated in the UFC octagon. The only thing close to a blemish through his five fights has been a draw Sam Alvey. Following the victory, the light heavyweight said he was ready for “everybody.” 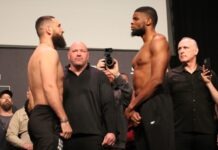