Bates just continues to look great moving to 4-0. He got the fight down quickly with a single leg. As his opponent got back to the feet Bates took the fight and back down they went. His opponent fought to turn towards him but Bates went ahead and took the mount. Right away Bates locked in an armbar and forced the tap. Just another flawless performance from Bates.
Grade: A

Gibson had a rough round one getting taken down twice. Outside of an armbar attempt, Gibson spent the round off his back. In round two Gibson was on a mission. He kept his opponent at bay landing the jab and heavy kicks. A heavy kick landed to the body as his opponent shot in for a takedown. Gibson had the guy’s hand behind his own back and landed an elbow and some big knees. Gibson jumped on the back and with the arm still pinned a few unanswered bombs sent the ref in. Brutal finish and an even sweeter comeback.
Grade: B+

What a fight and an amazing performance from Inaba. This was all volume and power shots from the Hawaiian. Inaba was landing her head kick and was throwing punches and kicks together rapidly. A key head kick from Inaba landed and she buckled her opponent with a right hand at the end of the first. Nothing different in round two as Inaba attacked with a slew of offense. She pressed her opponent against the cage and an elbow cut the other girl. Inaba got the takedown from a single leg. From the other side of the body Inaba locked in an arm-triangle and came across the body and got the tap.
Grade: A+

Browne made his Bellator debut and it was against a tough guy in Bobby Lee. Browne was landing well on the feet showing good head movement and his right hand. It forced Lee to shoot for a takedown. He didn’t get the takedown but took Browne’s back standing. Browne rolled for a leg and won with a heel hook.
Grade: A

Berkhamov finally made his Bellator debut and he showed out. His opponent was Jaleel Willis, who was on a six-fight win streak and was 2-0 in Bellator. Willis capitalized on a slip from Berkhamov. He took the back but Berkhamov shook him off and got on top. Berkhamov took the back and transitioned to an arm-in guillotine and Willis tapped. A really well set-up submission from Berkhamov.
Grade: B+

This was a dominant performance from Khavalov handing Brazil’s Patrizio de Souza his first loss. In round one Khavalov threw a right hand right into a takedown. He dominated on top posturing up and landing heavy punches. In round two he dropped Souza with a big left hook. Khavalov took the back and landed a barrage of ground and pound getting the TKO stoppage.
Grade: A+

Akhmedov dominated in his fight. In round one, it wasn’t thirty seconds and he got the takedown. His opponent worked his way to his feet a few times but with the hands around the waist, Akhmedov kept throwing him back down. Some thudding ground and pound were landed but he made it out of round one. It was just shy of a minute into round two when Akhmedov finished the fight. He was throwing a lot of kicks. He landed a body kick to a straight left that visibly shook his opponent. Akhmedov landed a left hook to the body dropping his foe and the ref stepped in.
Grade: A

Mowles did his thing and moved his win streak to six. The only downfall of his performance is he couldn’t get the finish. That’s because he kept taking the fight down and got a dominant position. Even the brief striking exchanges Mowles won. There was a moment in round two who Mowles was taken down and he used a single leg to get back up and get the takedown himself. His jiu-jitsu just showed to be top-notch with his transitions and control.
Grade: B+

Wilson impressed me in August and did again this fight in only thirteen seconds. His opponent threw a blind leg kick and Wilson caught him with a right hand. The follow-up ground punches put his opponent briefly out and the ref stepped in. Still young in his career but he’s continued to build his name.
Grade: B-

Wang-Kim looked outstanding. Well-rounded ability is what the 28-year-old showed. When he slipped to the mat in round one he attacked a kneebar, triangle, and an armbar twice. All those were tight together and thrown together extreely quickly. While on the feet his footwork and his placement were on point. Wang-Kim landed a lot from the outside and exploded in with flying knees. In round two Wang-Kim got into the clinch and landed a knee to the body and then the head, dropping his opponent. He jumped on his opponent for the finish and eventually the ref stepped in. Wang-Kim looks like a future talent.
Grade: A+

What stopped Aida from a better grade is that his takedown defense is horrible. He was taken down multiple times through five rounds. More of the fight played out on the feet and that’s why Aida won the fight. His striking looked really good and it’s a surprise he couldn’t finish his opponent. Slipping out of the way with good movement and good head movement and returning is what Aida did. Aida was throwing in combinations every time he attacked, and that was frequently. Striking looks outstanding but his takedown defense looks mediocre.
Grade: C+

Since losing on the Contender Series last year Buzukja has won his next/last two fights. Not the best of opponents, it still just took a little over a minute to finish the fight. Buzukja marches forward, threw two heavy kicks, and landed a right-left flooring his foe. His opponent grabbed a leg but Buzukja landed some huge hammer-fist to the side of the head. He then pinned the guy against the cage landing ground and pound putting him out cold. This was his first Ring of Combat title defense.
Grade: B-

Coming off his stint on TUF 28 Argueta made a huge statement. He took his opponent down fairly quick. He shot in on a leg and circled to the back to get the takedown. Argueta didn’t let up elbowing his opponent’s face repeatedly. He moved into the mount and still was raining down elbows until he took the back. Seemingly from the back he went to an armbar and his opponent tapped. It’s a shame he missed weight because he looked tremendous.
Grade: A

Nothing flashy about the performance but Smirnov asserted himself firmly and was in full control. Smirnov would pick at range with the one-two, long jab, and kicks. He landed that body kick a few times but one of the ones that landed crumbled his opponent en route to a first-round stoppage.
Grade: C+

Ali fought a guy making his debut but someone who was a master of sports in hand-to-hand combat and Greco-Roman wrestling. His opponent attempted to take him down. In what seemed like a strong body lock takedown Ali was able to turn towards him and took his back. In some scrambles, Ali maintained top position and landed ground and pound until the ref stepped in.
Grade: B-

Frenchman Oumar Sy impressed in his KSW debut. He landed a hard leg kick that forced his opponent to take him down. Sy used the cage to sweep and get top position right away. He was landed ground and pound and when he got leverage in full guard he landed a series of hammer-fist shutting the lights out.
Grade: C+

This fight went to a draw since a point was taken from Musaev for grabbing the cage. He still should’ve won the fight which was an odd decision. Musaev was taken down twice but nothing came from them. For the most part, Musaev beat his opponent to the punch every time just getting off his strikes first. He fought loose throwing a spinning backfist and spinning kicks but everything was set up. Musaev was just too quick for his opponent and mixed it up really well.
Grade: B+

Rutkowski was hurt in the first thirty seconds of the fight off a flying knee and a head kick. The opponent Filip Pejić took it to him early but Rutkowski gradually took over as the fight went on. Rutkowski kept in the face of Pekic giving him no space and chucking heavy strikes. In round two Rutkowski was landing his left kick to the body and legs. Pejic attempted to catch a kick but this time Rutkowski went up high landing to the head knocking him out.
Grade: B 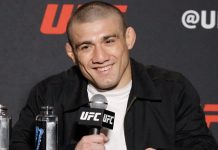 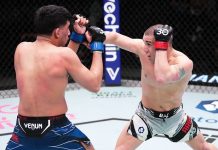 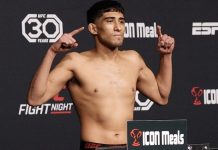