Perhaps the most surreal moment at UFC 267 in Abu Dhabi was watching Khamzat Chimaev hoist up Li Jingliang for a takedown, carry him, turn to Dana White cageside to say a few words, then slam the Chinese fighter down.

Just another day at the office for Chimaev, who was returning from a year-long absence after setting the MMA world on fire in 2020.

Just what did he say to White during that sequence? The UFC President let media outlets in on the conversation, such as it was, during the post-fight press conference.

“He was yelling crazy sh*t at me the whole fight. I don’t know why,” White said following the event. “Basically just saying ‘I’m going to fight everybody, I’ll fight Brock Lesnar, I don’t care who it is,’ he was just yelling stuff like that.”

Regardless, it appears Chimaev is back in top form, after battling COVID-19 earlier this year. That’s a notion White agreed with.

“100%. Last time we were here, we knew this guy was special,” said White. “This COVID thing is one of the weirdest things we’ve ever seen. You get some people that fit the profile to be high risk, and it doesn’t even feel like a bad cold to them. And a guy who’s in phenomenal shape like this guy is, gets hit hard as he did by COVID. But he’s back, and there’s no doubt this kid is special.”

The question now is, will the UFC keep Chimaev busy, or have him sit and wait until a highly ranked opponent becomes available. White appears to like the idea of him staying busy.

“It’s tough once you start to break into the top 10, which he will do on Tuesday. But listen, if he wants to stay busy, I’m a big believer in that anyway,” White stated. “Especially with the huge layoff he’s had. I don’t know, we’ll figure it out if that’s what he wants to do.”

Summing up Chimaev, White added “he’s got more wins in the UFC than he’s been hit in the UFC. That’s crazy.” He would later note the possibility of Chimaev fighting Nate Diaz, who has one fight left on his deal. Not that anything is set in stone.

“Yeah. Anybody in that weight class could be an opponent for Nate Diaz,” White said to the suggestion.

According to White, Khamzat was the star of the show at UFC 267 when it came to the UFC’s metrics. “Ten times more than anybody else.” 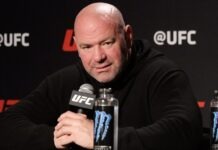