Amanda Ribas picked up a nice comeback win over Virna Jandrioba on the UFC 267 prelims.

Strawweights Amanda Ribas and Virna Jandiroba faced off at UFC 267, in an all-Brazil battle between two top 15 fighters in the division.

Ribas entered the night looking to bounce back from a loss to Marina Rodriguez back in January; Jandiroba was looking for her second straight win. Last time out, she’d picked up a win over an injured Kanako Murata.

Jandiroba opened up with a big takedown attempt from half the cage out and was stuffed. Ribas exited and landed a nice spinning back kick before another takedown attempt by Jandiroba that was stuffed and ate a right hand off of the break. However, the third time was the charm, as Jandiroba got a massive takedown and ended up in full guard. Ribas went for a teepee triangle but wasn’t able to get it, and Jandiroba began to get heavier on top and landed some small shots from the top. Ribas worked her way back to the feet and was dropped with a big right cross to end the round.

Ribas had some success to start the round with a nice combination. She began pushing Jandiroba to the back of the fence with pressure and was clearly the more established striker. She even was able to get a takedown in the final moments of the round, a nice way to bounce back after a rough first round for Ribas. 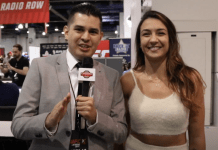