Two-time Olympic gold medalist boxer Shields returns to the PFL smart cage for her second professional MMA fight on Wednesday against Abigail Montes. However, another popular name in boxing has been tied to Shields for the past couple of months.

Last month, at the PFL championship official press conference, Shields said she would “never fight on the undercard of Jake Paul” and that suggested that she could beat up the Youtuber-turned-boxer.

On Monday, Shields doubled down when a reporter asked her to react to people being surprised at her comments last month.

“Please. I don’t know what world people live in which a man who has not been to the Olympics, a man not fought professional-like; there are a lot of women in boxing who can beat up men, especially a regular old joe like Jake Paul. Come one, it don’t make sense,” Shields told reporters during PFL 2021 World Championship media day. “If I were to spar Jake, which I know is too much to actually get a fight with him because that would be too embarrassing. But if we were to spar, I could use one hand, my jab. I don’t have to use my banger. I use my jab, and I can out jab, out hook, and out uppercut him.”

“Embarrass him. That’s how skilled I am. It’s not a shot at Jake Paul like, ‘Oh, you’re trash.’ It’s like, you’re not a great as me. You’re not as great as a boxer as me and if you are, go to the Olympics. Go. I’ve sparred against those guys too, who are Olympic silver and gold medalists. Jake Paul couldn’t grace the ring with those guys because they would destroy him, just like I would.”

“It’s not disrespectful. I’m a skilled boxer; respect it,” finished Shields. “Just because I’m a woman, don’t get it trippin now.”

Watch the full PFL 2021 World Championship media day appearance from Claressa Shields above. More coverage can be found below. The event takes place this Wednesday, October 27, 2021, in Hollywood, FL. 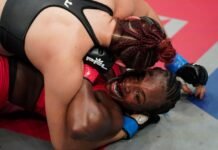 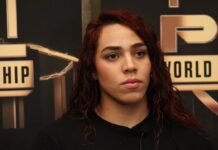