UFC Vegas 41 is in the books, and Marvin Vettori is back in the win column at light heavyweight. While Paulo Costa’s weight management struggles (later blamed on a bicep injury) injected the bout with some last minute drama, it didn’t take away from the action in the end. But how much credit should Vettori get in the 185lb weight class for a 205lb win? Read on.

Previously known mainly as a hot-head who refused to accept his losses to Israel Adesanya, Marvin Vettori’s image underwent something of a makeover ahead of UFC Vegas 41. By loudly proclaiming he’d take the fight with Paulo Costa at any weight, then backing up those words as the fight moved first to a 195lb catchweight, then to 205lbs, Vettori picked up a win both in and outside of the octagon.

Since his opponent was also a former middleweight title challenger, and given it’s clear Vettori can make 185, there’s no reason not to count this win as anything but extremely significant. “The Italian Dream” has now appeared in four straight main events, and won three of them. His only losses in years have come to Adesanya.

That, however, is the problem. A third fight against Izzy is a hard sell, even coming off a win over Costa. Vettori will need at least a few more before he gets another shot at gold, unless Robert Whittaker topples “The Last Stylebender” in a fight expected early next year.

With Vettori ranked #5, coming off a win over Costa and with Whittaker-Izzy and Jared Cannonier-Derek Brunson set, there’s only one play for the Italian. Sean Strickland was supposed to face Luke Rockhold at UFC 268 in just two week’s time. Rockhold was forced out due to a herniated disc. Vettori probably can’t make the date, but pair him up with Strickland and push it back to an amicable time frame.

After a year on the shelf due to an ACL injury, Jessica-Rose Clark returned to action at UFC Vegas 41 and secured a decision win over Joselyne Edwards. The fight wasn’t a thriller, but it gives Clark two straight wins in the UFC women’s bantamweight division. Clark is now 2-1 there overall, and Jessy Jess is a popular figure in a thin weight class.

That, however, is no reason to rush her development. Building her back up slowly after a significant injury is the right play. Stephanie Egger is coming off a recent win, and the timing works. Book it, and if Clark puts on a strong showing, then give her a step up and see if she can make a run to the top.

There was a time where it felt like Alex Caceres would never live up to his true potential in the UFC. Suddenly, that feels like a distant memory, as “Bruce Leeroy” is sitting on a five-fight win streak, with submission finishes in two of his last three bouts.

Caceres’ recent run has been remarkable. He’s looked comfortable. But we’re going to go a little left field on this one. Doo-Ho Choi, like Caceres, had some early hype, starting his UFC run strong. He’s since fallen on hard times, losing three straight, including the 2016 ESPN Fight of the Year against Cub Swanson. On opposite trajectories, Choi either gets back on track against a fighter with a full head of steam, or Caceres earns a win over someone who still has considerable name value.

At 43, Francisco Trinaldo is one of the UFC’s winningest “old guys,” and he picked up a spit decision victory against Dwight Grant over the weekend. Now 4-1 in his last five, going back to his lightweight days, it’s time to see if the veteran will sink or swim at welterweight.

Max Griffin sits on a three-fight win streak, and is always a game opponent. Throw them together for a fun fight.

While his win came with a bit of controversy due to strikes to the back of the head, Nicolae Negumereanu earned his second straight victory inside the octagon against Ike Villanueva at UFC Vegas 41.

Like Negumereanu, Tafon Nchukwi is 2-1 in the promotion, coming off a win, and last competed back in September. This one doesn’t go the distance. 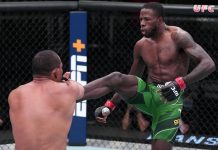