Budd (15-3) is set to take on veteran Kaitlin Young at lightweight, but already has her eye on next season. In fact, she had hoped to join the PFL earlier this year, with the goal of being a tournament alternate.

Moving over from Bellator, Budd told media outlets including Cageside Press on Monday, “was an easy choice for me. The way that they’re doing this league has just been— it’s something that’s exciting. It feels kind of like a new start for me. I was a proud Bellator fighter for seven years, became a four-time world champion there, and I was ready for a change, and I’m ready to take over PFL.”

“After my last fight, we asked to be released early, to get in as a potential alternate for the 2021 season,” Budd revealed. As early as May is when Budd became focused on switching to the PFL. “That [Cris] Cyborg rematch wasn’t really being presented, and that would have been the make-or-break probably. But at the end of the day, this is where my path led me, and I’m just excited to be here and be a part of this team.”

Cyborg was the woman who defeated Budd to claim the featherweight title in Bellator in January 2020. Despite winning her next two bouts, Budd didn’t appear anywhere closer to running it back with the Brazilian champ. Later, Budd would reiterate that the Cyborg rematch “wasn’t on the table, so it was very easy to think about coming over here, seeing what they’re doing.”

Being able to watch from the sidelines got Budd excited about how the league has been laid out, she added. “What they’re doing I think is amazing, and you’re going to hear about more girls coming over here. There’s a lot of us that can’t make 135, 125, and the fact that they’ve built a home for girls this size, you’re going to see lots more signings I believe.”

The tournament format, knowing when she’ll be fighting, was a huge factor in signing with the PFL, Budd explained. “And then that end goal, kind of like, ‘okay I know exactly what I’ve got to do for step one, step two, step three.’ Win win win, gain as much points as possible, and then get that championship fight at the end. I think that clear trajectory is something that, as an athlete, it’s very exciting.”

Watch the full PFL 2021 World Championship media day appearance from Julia Budd above. More coverage can be found below. The event takes place this Wednesday, October 27, 2021 in Hollywood, FL. 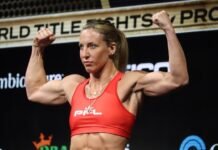