For the past several years, Ontario, Canada has been home to BTC Fights, Prospect FC, and little else in terms of MMA action. That will change this December, with the launch of Tarps Off Fight Club.

In a press release distributed Wednesday, promotion officials announced their inaugural event, Brawl by the Falls, with the newly established featherweight title on the line. The belt will be contested for by Michael Imperato (9-4) and Eric Wilson (7-10), with the card streaming live on Fite.tv on December 18, 2021. The event will take place at the ScotiaBank Convention Center in Niagara Falls, with a COVID-19 limited audience of up to 1,300 spectators.

Imperato, fighting out of Woodbridge, Ontario, will ride a two-fight winning streak into the event. He holds a win over recent Contender Series contract winner Mike Mallott, and has shared the cage with current UFC fighter Julio Arce.

Wilson started his career strong, picking up a win over UFC veteran Roland Delorme and starting out 5-0. He has stumbled since, and has lost his last three bouts, including one against recent DWCS winner Chad Anheliger.

For those wondering what exactly “Tarps Off” means, it’s a bit of Canadian hockey slang perhaps best explained by the greatest cold open in Canadian TV history.

In addition to announcing their inaugural event, Tarps Off Sports also announced an after party for the Niagara Falls show — hosted by former Strikeforce champion and UFC contender Jake Shields. Shields has also been announced as a guest host.

Tickets for Brawl by the Falls are available to purchase now via tickets.com; more info is available at fallsconventions.com 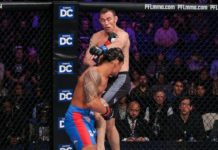 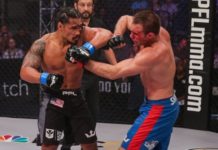 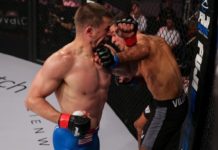