Two women’s featherweight fights in a short span could signal change for the UFC, and the time is right for them to go all in on the weight class.

One thing sorely lacking from even the latest UFC video game by EA Sports is a GM Mode of some sort. Sure, it would only work with fighters under license to the promotion, but putting together weight classes and building events, from the location to the card itself, could be fun. Which is probably where the inspiration for this article came from — because if they play their cards right, the UFC could actually build a solid women’s featherweight division in 2022.

Let’s look at who they have now, for starters. While she’s best known as a bantamweight, Amanda Nunes is the champ-champ, holder of both 135 and 145 pound titles in the UFC. If for no other reason than to market her as a double champ, keeping the women’s featherweight division around makes sense for the promotion. That’s why they’ve done it thus far, and before Nunes, it was the Cyborg Show.

Of course, even keeping the division around for Nunes means you need contenders, and these one-off fights in a pseudo weight class just aren’t cutting it. Currently, the promotion has Felicia Spencer, Danyelle Wolf, Zarah Fairn, and Norma Dumont as their only “true” featherweights outside the champ. This weekend, Aspen Ladd made her official debut at 145lbs, and despite giving up a height advantage to most girls in the weight class, featherweight is probably the right home for her. Coaching controversy aside, it wasn’t like Ladd’s loss to Dumont saw her blown out of the water. She just looked rusty.

Then you have former bantamweight champ Holly Holm. Holm was supposed to fight Dumont this past weekend, but was forced off the card. The former champ has tried her hand at featherweight before, and has the right frame for the division.

The UFC tried to move Dumont and Fairn down to bantamweight, but both have missed weight there. And Spencer is set to welcome Leah Letson back to the octagon shortly. That will mark Letson’s first fight since 2018. A second featherweight fight within the span of a month? Could that signal more to come?

For argument’s sake, fighters like Germaine de Randamie, the UFC’s inaugural 145lb champion, and Macy Chiasson, who won The Ultimate Fighter 28 at 145lbs, could be options as well, if they were willing. And really, most fighters want the shortest path to gold. That’s what this is all about, really.

Where does that leave us?

Not quite a full division, at least not yet. But there are some other factors that could make 2022 interesting.

Megan Anderson has not fought, nor signed on with another promotion, since being released by the UFC after falling short against Nunes earlier this year. That release seems premature in hindsight; Anderson is a true featherweight who is still in her prime, and extremely marketable, interacting with fans on her popular Twitch channel.

Kayla Harrison, meanwhile, will become a free agent after the PFL 2021 World Championship later this month. Harrison is already a massive star for the league, well-known to fight fans. She’s all over ESPN, is a two-time Olympic gold medalist, and arguably the most dominant female fighter since Ronda Rousey’s early run, and Nunes herself. The UFC is likely to push hard for her services, but realistically, Harrison is only going to make the jump if there’s a division waiting for her. Not doing that? Well, the promotion tried it with Cris Cyborg. Didn’t work so well.

Harrison, it should be noted, has taken all of her fights at lightweight. She did make 145lbs for her Invicta FC fighter last year, but that’s where the weight cutting will stop. Harrison will more than likely never fight at bantamweight.

In any case, suddenly you have a dozen names to populate a women’s 145lb division in the UFC, with bonafide stars in Amanda Nunes, Kayla Harrison, and Holly Holm.

Need to fill out the division? You have The Ultimate Fighter back, and the 2022 edition would be wise to focus on women’s featherweight again. Only this time, don’t bounce all the runner ups or force them down to 135. Alternately, you could use the 2022 season of Dana White’s Contender Series to round out the weight class. Realistically, you can get away with 15 to 20 names and have an extra star or two to headline cards.

Especially if Kayla Harrison does make her way to the octagon next year. 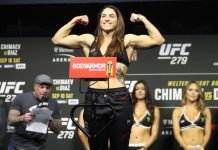