Last week, the critics labelled Aspen Ladd a villain for missing weight against Macy Chiasson. This week, she is the savior for the UFC Vegas 40 main event. What a crazy world MMA can be.

Aspen Ladd stepped in on short notice Saturday night to replace an injured Holly Holm against a rising star in the featherweight division, Norma Dumont. It’s the sort of opportunity not normally afforded to a fighter who blew weight just two events prior, but desperate times and all.

Ladd fell ill due to her weight cut two weeks ago, though she would later insist Chiasson had turned down a catchweight fight. After some backlash, Ladd put all that negativity and noise behind her and took a fight at featherweight against  Norma Dumont to save the UFC Vegas 40 main event.

Dumont, on a two-fight win streak to start the night, welcomed the bantamweight Ladd to the division, and a rude welcome it was. Although a fight and a win over a big name and former champion like Holly Holm would have raised Dumont’s stock in a hunt for a title shot, the victory over Ladd could very well have the same result in the end. Especially given the scarcity of contenders for Amanda Nunes at 145lbs.

After five rounds at UFC Vegas 40, the fight went to the judges’ score cards. It looked like Aspen Ladd needed a finish the entire fight, as Norma Dumont seemed to have a sizeable lead after each round, playing defence with a disciplined jab. Ladd’s corner pleaded with her in between rounds to get something going, but it was a little too late because after five rounds the judges gave Norma Dumont the unanimous decision victory.

Check out how pros reacted to the UFC Vegas 40 main event below. Perhaps the biggest reaction was regarding Ladd’s coach, who chewed her out between rounds.

Level change, feints, and angle changes. Just a few ways to break the rhythm of a jab. #UFCVegas40

Dumont gives a little hope to the 145 category, and you can run as a future contender for amanda #UFCvegas40 @ufc

This guy is James Krause when you order from wish

Glad I’m not the only one to see it https://t.co/BKtB5mNL6B

How y’all feel about that ‘coaching’ in the main event?! #ufc

“ idk what your doing” the exact words from @TheAspenLadd corner poor choice of words but I feel his frustration. @ESPNPlus 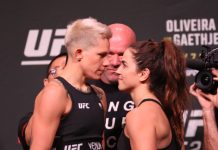 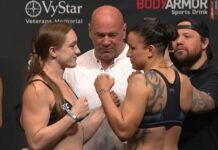