For the third time in their shared history, heavyweights Tyson Fury and Deontay Wilder faced off in the ring on Saturday night.

On an evening where the UFC took a back seat, airing an understated card earlier in the day, the trilogy bout between WBC champ Fury and ex-champ Wilder was given the opportunity to shine. Their first fight, in 2018, had ended in a draw, with Wilder retaining the WBC heavyweight title as a result. He would successfully defend the belt twice following that fight, before being finished via TKO in the rematch last year.

Fury now holds both the WBC and The Ring heavyweight championships, as the latter title had been vacant and up for grabs in their rematch.

With Fury once again considered the best boxer on the planet (at least among heavyweights), the stage was set for a third fight. Not quite a rubber match, with Wilder yet to have an official win over the British star known as “The Gypsy King.”

In the wake of his loss to Fury, Wilder had fired his coach, blamed the costume he wore out to the ring in their second fight for slowing him down, and claimed to have hit the gym hard for the rematch. He also claimed that Tyson Fury used loading gloves in their rematch, but offered no evidence to back up the allegation of cheating.

The early prelims for Fury vs. Wilder 3 at the T-Mobile Arena in Las Vegas, Nevada kick off at 4:30PM ET on Saturday, October 9, 2021, airing on ESPN. Check below for full results from the event. 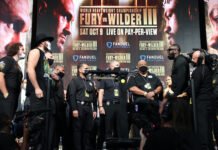 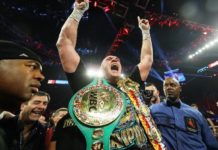