The UFC returns to the Apex this weekend — or more accurately, continues its run there — with a ten-fight card that is mostly flying under the radar.

UFC Vegas 39 is topped by a battle between ranked strawweights, as Mackenzie Dern looks to continue her recent string of successes against Marina Rodriguez. Aside from Dern, and to a lesser extent Rodriguez, star power was scarce, but some interesting match-ups had the chance to make up for it. In the co-main event, Randy Brown was set to face Jared Gooden, while Tim Elliott, Sabina Mazo, Deron Winn, Jared Vanderaa, and Charles Rosa also appeared on the docket.

Weigh-ins for UFC Vegas 39 were set to take place Friday morning in Las Vegas. Check below for full results as the full card hits the scale.

One fighter was heavy at the UFC Vegas 39 weigh-in on Friday. But it was another fight that was cancelled altogether. Jared Gooden came in 3lbs over the non-title welterweight limit for his co-main event fight with Randy Brown. But it was the last-minute bout between Phil Hawes and Chris Curtis that fell off the event. Although Curtis weighed in successfully, Hawes did not hit the scales, with ESPN later reporting that he had not accepted the fight.

* Jared Gooden weighed in 3lbs over the non-title welterweight limit 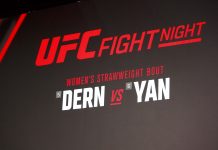