A women’s featherweight match-up between a pair of top 10 veterans has been booked for Bellator 271.

Blencowe (14-8) is currently the #1 ranked female featherweight in Bellator MMA. The Australian has twice challenged for gold in the promotion, most recently last October against Cris Cyborg. Blencowe wound up submitted in the second round.

In her her most recent fight, Blencowe bounced back against Dayana Silva, earning a third-round TKO finish.

Pam Sorenson (9-3) joined the promotion earlier this year, vacating the Invicta FC title she had claimed against Kaitlin Young in 2019. “Bam” picked up her second straight victory in her Bellator debut, earning a split decision win against Roberta Paim Samad.

Sorenson is currently ranked #7 in the women’s featherweight division.

Bellator 271 is expected to take place November 12, 2021 at the Seminole Hard Rock Hotel & Casino in Hollywood, FL. Another women’s featherweight fight headlines, as Cris Cyborg will put her title on the line against Sinead Kavanagh. The only other fight reported for the card thus far is a heavyweight bout featuring Linton Vassell and Tyrell Fortune. 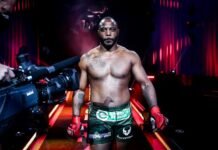