Kevin Holland and Kyle Daukaus have a date lined up for their rematch, following a premature end to their co-main event fight at UFC Vegas 38.

Holland vs. Daukaus 2 is expected to take place on November 13, per a report by ESPN, the UFC’s official broadcaster. The promotion has not yet officially announced the contest.

Holland (21-7, 1NC) came to just as ref Dan Miragliotta was about to wave the action off. With Holland suddenly defending, the ref backed off, though he immediately signaled for a review of the sequence. Daukaus (10-2, 1NC) then caught Holland in a submission, choking him out — but upon review, Miragliotta deemed the accidental foul to have led to the finish. That resulted in a No Contest.

While it’s a rare instance of instant replay being used effectively in MMA, the result also created the need for a do-over. With Holland only taking a 30 day medical suspension and Daukaus receiving none whatsoever, the door was opened for a quick turnaround.

Prior to their first meeting, Holland had lost two straight, against Marvin Vettori and Derek Brunson. Daukaus, for his part, was coming off a single loss, to Phil Hawes.

The UFC’s November 13 event will take place at the UFC Apex in Las Vegas, Nevada. The card currently breaks down as follows: 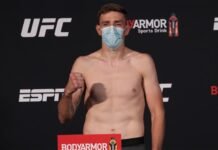