Tafon Nchukwi has finally opened up about his big cut to middleweight, and not being able to perform fully.

“Da Don” recently got back into the win column and rebounded from his first professional loss, picking up the W at UFC Fight Night: Smith vs. Spann. He defeated fellow Dana White’s Contender Series alumni Mike Rodriguez via unanimous decision.

Nchukwi moved back to light heavyweight at the event, after taking his first two UFC fights down a division a middleweight. He went 1-1 at middleweight, going to a decision for the first time in his career.

In an exclusive interview with Cageside Press, Nchukwi opened up about his cut to middleweight, which he prefers not to talk about in any of his interviews.

“Man, that cut is not easy at all. I don’t really speak on it because it’s my own thing,” Nchuwki said.

His first cut was from heavyweight to light heavyweight, which occurred for the Dana White’s Contender Series. It was his first time actually cutting weight.

“That was the first time I had to cut weight ever. I did that one by myself for three months just eating watermelon and chicken breast, and by the time I got in the ring, mentally I had recovered by physically it is like, my body isn’t there,” Nchukwi said. “I was miserable my last three fights-Contender, my debut, and my first loss.”

“My body just didn’t respond. My mind is like, ‘okay, I’m about to throw this jab,’ I know I’m going to see something, but my body is like yeah, hold up big fella, you think you’re going to kill me this whole time, and I’m going to give you what you want? It was just a miserable experience.”

Nchukwi plans to go back to middleweight, but he will listen to his body and do it the right way.

“I got to slow it down. This cut back to 185, I have to take my time with it and make sure I’m right with myself, and when I say myself, I’m talking about discipline with food,” Nchukwi said.

As for his cut to light heavyweight in September, it was great, and he felt alive.

“Smooth. Man, that [cut] was beautiful,” Nchukwi laughed. “People don’t understand like just this whole camp was f*cking beautiful. This whole time not having to worry about making weight and just focusing on actually training like I’m supposed to be doing. It was a great day every day going into training…my last three fights prior, the only focus was making weight.”

Watch the rest of the interview with Tafon Nchukwi above, where he talks about his performance against Mike Rodriguez, UFC Africa, a potential William Knight rematch, fighting again in 2021, and more. 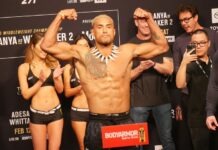 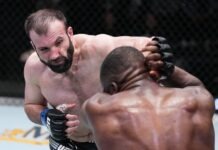