Garcia (9-1) is fighting for a UFC contract on Tuesday in the biggest fight of his career. He takes on Joshua Weems (8-1) on week six of Dana White’s Contender Series Season 5. Garcia was initially matched up with a fellow hot prospect in Paul Capaldo; however, a positive COVID-19 test forced Capaldo to withdraw from the fight.

Garcia was really looking forward to the match-up with Capaldo because of the hype behind him and because Capaldo has gone viral a few times due to nasty knockouts.

“It is what it is. Paul had said some things in a couple of interviews I didn’t like, and I was so ready to shut this kid up. He comes with a lot of hype, and I don’t think he’s ready. I don’t think he was ready to fight me; I was going to break him and take all his hype and following. But like I said, line them up,” Garcia told Cageside Press in an exclusive interview. “It is what it is; I don’t think the kid was ready, but Josh stepped up, and he seems game. I don’t really care who I fight.”

Garcia is used to having short notice opponents because he has been plagued with them throughout most of his career. So he is just thankful that Weems stepped up and took the fight.

Garcia doesn’t have a prediction other than he knows he is going to win.

“I’m not going to get crazy with the predictions; I just know that I am going to win. I have to win. I’m not trying to sound cocky, but I’m willing to die in there. I’ve worked since I was 17 years old for this, and it’s been 12 years of hard work and full-time training. He is really going to have to kill me to get me out of there. This is my life,” Garcia said.

Watch the rest of the interview with Fernie Garcia above, where he talks about his MMA origins, fighting on the Chuck vs. Tito 3 card, Fortis MMA, Miles Johns, the bantamweight division, and more. 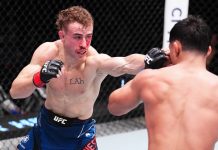 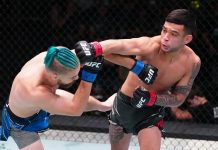 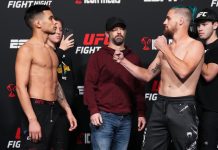 Welcome to the UFC: Joshua Weems