Against all odds, UFC Vegas 38’s main event went to a decision and saw Thiago Santos come out on top.

Unstoppable force, meet immovable object. That was the feeling you got when viewing the UFC Vegas 38 main event from afar.

Or, maybe, two powder kegs barrelling towards each other. Whatever happened between Johnny Walker and Thiago Santos on Saturday, it seemed destined to be explosive.

Right up until it wasn’t.

Many expected both men to blitz and go for the kill in round one; instead, we got a surprisingly measured approach from both men. They both attempted to gauge the distance, as they both traded leg and body kicks for the duration of the round. Santos seemed to get hotter over the course of the round, and landed a good flurry to close out the frame. However, it was likely Walker’s round due to activity.

In the most shocking move of 2021, Santos opened up round two with a takedown attempt that was stuffed by Walker. Walker landed some hammer fists on the way up after the sprawl, and Santos returned with a big overhand right of his own that landed. Santos followed it up with a good leg kick, responded to with a good leg kick by Walker. Santos began working on the body of Walker, landing a huge body kick that landed clean. Overall, round two still had a slower pace but it was starting to heat up.

In round three Santos turned up the pressure; he continued to find a home for his calf kicks, but he also began feinting greatly. Santos kept Walker guessing all round long, Santos began to find a home for his left hook, and Walker was almost frozen to respond as Santos began to find his groove. Heading into the championship rounds, it seemed that Santos had the momentum.

Santos came out with a nice flurry to open round four, punctuated with a hook to the body. Walker responded with a teep kick and Santos responded with a hard body kick. Walker began landing many of those kicks, as he began feinting and making Santos second guess, overextending. Walker began to rally back in the fourth as he became the more active guy, landing more kicks to the body and taking the center of the octagon. He wasn’t doing much, but he was doing more.

Walker opened up round five with an inside kick, keeping up the theme of the last twenty minutes. A hint of action came not that long after, as Santos landed an overhand right following a jab by Walker. Santos connected soon thereafter with a similar overhand right that nearly dropped Walker, but despite Walker calling him on, Santos backed off. Walker went right back to pressuring Santos for the rest of the round, and against all odds, we went to a decision. 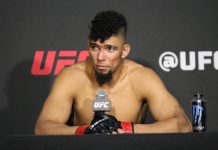