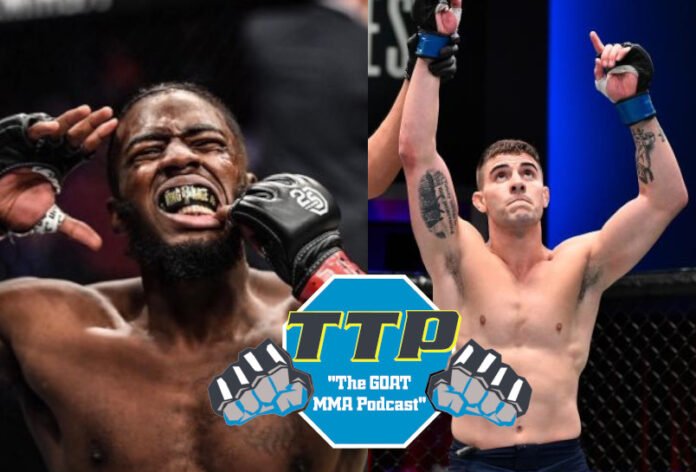 We’re kicking off this episode of TTP with an interview with UFC Vegas 38’s Devonte Smith. He shares how he got started in MMA which includes a stint as a high school wrestler. Then we discuss why we don’t see more of that wrestling in his game and how he discovered that he has dynamite in his hands. Plus, we talk about his upcoming fight with Jamie Mullarkey. The Australian is coming off a KO win over Smith’s friend and former opponent, Khama Worthy. Smith looks to get a KO in his column come Saturday.

The TTP crew of Gumby and Shockwave have been red hot week-after-week. Once again, they’re hitting you with their picks in the easiest to digest way out there. Sick of hearing people drone on for hours just to hear who they like to bet on? Good news, you don’t have to anymore. Let the guys give it all to you in 15 minutes or less, or your pizza is free. (Note: TTP/Cageside Press do not offer pizza delivery services, just delicious, delicious picks). Plus, where else are you going to get all the underdogs and parlays to make that plus-money?

We close this episode with another member of the UFC Vegas 38 fight card, New Jersey’s own Joe Solecki. After winning 3 straight over some real OGs of the MMA world, including Jim Miller, Solecki looks to get his name on the UFC’s ranking page. Standing in his way is Jared Gordon, who has faced plenty of stiff competition in his own right. Solecki discuss that match-up and why he feels his style is perfect for it. He also shares how he got into MMA thanks to a failing karate program and his parents supporting his every move.