I feel the need to start this off with a disclaimer: this is not in any way a dig at Nick Diaz, whose spot in MMA history, not to mention infamy, is secure.

Heck, it’s hard not to be thrilled with a week that brought with it both the return of Diaz, MMA’s favorite bad boy, and a new Guns N’ Roses track to boot (one that’s actually pretty good, in fact).

But see, much like the would-be biggest band in the world, Diaz isn’t quite what he once was. Oh, the parts are all there, but the machinery is just a little rusty. It still hits the right notes, most of the time. Or maybe that’s being generous. Some of the time. And we love it for what boils down to nostalgia, cheering on in the hope that some day, those same heights will be reached.

When it comes to a band, well, that’s just fine. There’s nothing wrong with nostalgia acts; AC/DC has pretty much made a career of releasing the same album over and over, and it’s the classic tracks that drive ticket sales. And screw it, they still rock. And if, on occasion like with the recent GN’R release, they hit their old heights, or even come close, even better.

But then there’s Nick Diaz, in the fight business, the hurt business, not running around on a stage but in a cage. I’m not about to call for Nick Diaz to retire; he’s a grown man and can make his own decisions. He had moments in his fight against Robbie Lawler where he looked good, a little like the Diaz of old. And I get where Tanner Boser is coming from when he gripes about those who say “He’s only doing it for the paycheck these days, time to hang ’em up.” Fighting is a career, and for those who have reached its highest levels, they have every right to cash in, and cash out when they choose.

Know what take I fuckin hate? “He’s only doing it for the paycheck these days. Time to hang em up”. Sorry guys, I forgot you all do your jobs purely out of burning passion for your work and an undying sense of purpose.

But then again, I’m not at risk of long-term health problems (at least not of a traumatic nature) working my desk job, unless I fall out of my damn chair. Repeatedly. Slash doesn’t wind up in hospital with a concussion if he bends the wrong note. The biggest risk Axl Rose runs in concert is running off the stage. There are few endeavors that match the risk of combat sports, and most that come close tend to be other contact sports.

More than anything, when I think about Diaz vs. Lawler 2, it’s a story of expectation versus reality. Their first meeting came at UFC 47, well before I even covered the sport professionally. 17 long years ago, Nick Diaz knocked out Robbie Lawler. In the past five or so years, he’s fought not once, and his only appearances seemed to revolve around whatever trouble he was in at the moment.

Expecting another masterclass from Diaz was foolhardy. And all the warning signs were there, yet like suckers headed to P.T. Barnum’s big top, many of us bought into the comeback storyline. Overlooking all the red flags and warning signs along the way: the disastrous ESPN interview, the media day no-show, changing the weight class days out from the fight.

“That’s just Nick Diaz being Nick Diaz” was the refrain. Well, maybe in part. And it was fun to see Diaz back in action, right up until it wasn’t. He even walked out to another musical favorite of mine, the Deftones, so bonus points for that.

But if I’m being honest, I could do without seeing too many more Nick Diaz fights, if any.

Nick acknowledging the crowd even after a loss #UFC266 pic.twitter.com/S4fIZlchUO 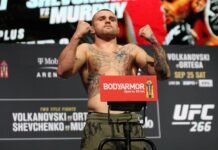