Kicking off the UFC 266 Pay-Per-View at the T-Mobile Arena in Las Vegas on Saturday was former strawweight champion Jessica Andrade, taking on another former strawweight, Cynthia Calvillo, in a women’s flyweight fight.

Andrade was returning from a disheartening loss to champ Valentina Shevchenko last time out. While the smart money had been on a return to 115lbs for “Bate Estaca,” a callout from Calvillo had convinced her to stick around flyweight for at least one more fight.

Brazil’s Andrade stalked her prey early in the PPV opener. Calvillo sat on the outside, circling and firing kicks. It wasn’t long before Calvillo landed a punch — and Andrade landed a far more significant counter. As the round wore on, Calvillo landed more shots, but Andrade walked through them like The Terminator, and everything she threw had a lot more behind it.

Mixing thing up, Andrade was also firing leg kicks. Calvillo continued to circle, mixed in low kicks of her own, but she was fighting a defensive fight. Every one of Andrade’s attacks, meanwhile, got the crowd roaring. More than once, Andrade had her opponent in trouble, landing with a nasty right hand. Just prior to the end of the round, Andrade unleashed with a flurry of right hands. More like a blizzard, really. Calvillo covered up, wasn’t defending, and the ref waved it off with seconds to spare.

After the win, Andrade called out the winner of the upcoming strawweight title fight between Rose Namajunas and Weili Zhang. A clear sign that her future is back at 115lbs. 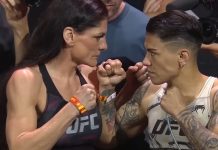 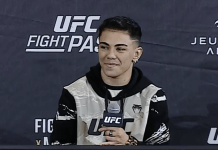