Fight fans have been eagerly awaiting the Bellator MMA debut of Yoel Romero for a while now, but they were not counting on Phil Davis to spoil the party.

“The Soldier of God” is another big free agent acquisition for Scott Coker and co. Yes, he’s 44-years old and coming off three losses — but none of those fights were blowouts, two were for the UFC’s middleweight championship, and one Romero arguably won.

While his Bellator 266 main event isn’t against Anthony “Rumble” Johnson, who Romero was initially paired up with earlier this year, Phil Davis is as suitable an opponent as any. “Mr. Wonderful” is himself a former UFC standout, not to mention a former Bellator light heavyweight champion.

Heading into the event Saturday, a lot of questions would be answered: did Romero still have gas in the tank? Could he hang with the behemoths up at 205lbs, after fighting at 185 for much of his career?

Round 1: Bell rings and they met in the middle of the cage. Davis looked to use his length to keep Romero at bay early. Romero waited and waited until he found his opportunity but Davis kept using his reach to make Yoel think twice. Davis attempted a right hand but Romero backs out of range. Romero went high with a kick but it was mostly blocked. Romero fought a very defensive fight early waiting to see what Davis would throw. Romero landed a leg kick halfway through the round and then went after the other leg. Romero clearly looked to use his kicks as much as possible clearly not worried about a takedown from Davis. Another leg kick from Romero welcomed a flurry from Davis and they had a momentary clash.

Both men threw kicks at the same time but only Romero landed. A quick feint from Romero showed Davis was ready to sprawl. Davis went in with a right hand a Romero countered with a left that landed. More kick exchanges as the round went into the 30 second mark. Davis landed a big leg kick and Romero landed one of his own as the round ended.

Davis’ corner told him he was faster than Romero and that he should use it.

Round 2: Romero did not have enough output in the first and came out just as patient in the second round. Davis went to work with his jabs and kicks as Romero avoided and blocked as best as he could. Romero answered a right hand from Davis with one of his own. Davis was very aggressive in this round as Romero did his best to counter early and did well! Romero landed shots on Davis that may have rocked the former Bellator champion. Davis attempted a takedown to no avail. Davis used his speed as his corners asked him to and found plenty of success but Romero clearly was looking for a quick shot to KO Davis.

For as much hype as the easy weight cut was for Romero he was still a bit slower. Davis landed pretty much anything he wanted due to the speed advantage. Davis relied on flurries to land on Romero and Romero ate a big right hand at the end of one of those. Romero clearly had problems with Davis’ length as well not being able to get inside to land shots. Romero got more aggressive and Davis took advantage shooting in for a takedown near the end of the round. Davis was on top looking to posture for ground and pound as the round ended.

Round 3: Both men met in the middle of the cage with Romero taking the middle of the cage. Davis still used his length and speed but with a much more defensive approach as the round began. Romero used his head movement and looked for angles using feints to attack. Romero attempted an overhand right and Davis used that to take him down. Romero was able to scramble but Davis stayed with the takedown and got Romero back down. Davis had Romero on the fence on his back and allowed Yoel to get back up. Davis dropped for a double and earned yet another takedown.

Davis used his left arm to lock up Romero’s right arm and landed elbows to the head of Yoel. Knees to the body of Yoel softened him up as Davis attempted to pass to full mount. The cage made it difficult however and Romero was able to explode back to his feet. It did not last long however as Davis took Romero back down and ended up on top.

Romero turned his back and Davis tried to put his hooks in but Romero got back up. Davis did not give up on the ground and pound however taking Romero back down. Knees to the ribs of Romero kept Yoel on the ground. Romero once again got back to his feet and Davis stayed with the clinch trying to take Romero down. Romero was tired and Davis kept landing knees to the body. Fight ended with both men clinched on the fence. 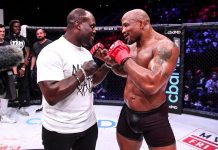