One of the greatest mixed martial artists of all time will take on one of ONE Championship’s most lethal strikers later this year.

During an appearance on The MMA Hour with Ariel Helwani, ONE Chairman and CEO Chatri Sityodtong announced that Demetrious Johnson would face Rodtang Jitmuangnon in a “special rules fight” at ONE X on December 5, 2021.

Per the ONE exec, said special rules will see the pair fight for four three minute rounds — alternating between Muay Thai and MMA. Up first will be Muay Thai, and the skill sets will alternate with each ensuing round.

It’s the type of hybrid fight often dreamed about, but rarely realized in modern martial arts.

Johnson (30-4-1) shot to the heights of mixed martial arts after claiming the inaugural UFC flyweight championship in 2012. Despite defending his title a record-setting 11 times, “Mighty Mouse” rarely had the UFC promotional machine behind him, and instead found himself relegated to headlining FOX cards, or serving as the co-main event, even as his stock rose.

Considered by many one of the greatest of all time, he eventually saw his title slip away in a close split decision with Henry Cejudo in 2018 — a fighter he had already previously defeated. Instead of campaigning for a rematch, Johnson opted to leave the promotion, in a “trade” for retired ONE star Ben Askren.

Johnson’s impact was immediately felt, as he won the ONE Championship flyweight grand prix in 2019. But after waiting over a year for a title shot against Adriano Moraes, he came up short — victim of a knee that would have been illegal under the Unified Rules of MMA, but that was perfectly legitimate in ONE Championship.

The AMC Pankration fighter has not competed since.

Rodtang, meanwhile, is the current ONE Championship flyweight Muay Thai champion. He last competed in April, stealing the show at ONE on TNT 1. The Thai athlete currently has a fight against Daniel Puertas booked at ONE’s First Strike card on October 15. 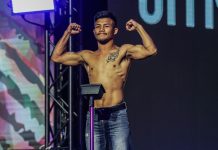