Jared Cannonier believes he will get a middleweight title shot over Derek Brunson if they both sit out.

Sometimes sitting out after a win will get you a title shot. Sometimes it will burn you. There are several examples of it going the latter. Poor Leon Edwards sat out most of 2020, not entirely of his own volition, and still doesn’t have a title shot. On the contrary, Colby Covington sat out and now has his rematch with the champion, Karamu Usman.

After defeating Darren Till, Brunson said in his post-fight interview with Michael Bisping that he is willing to sit out for a title shot.

“I’m not broke. I’ll sit and wait; you know what I’m saying? I know Izzy and Whittaker have a fight coming up; I’ll sit and wait. That gives me five or six months to get my body right and prepare for this last title push that I’m trying to make,” Brunson told Bisping.

On a five-fight win streak and ranked No. 4 in the middleweight division, Brunson has a point and could get the next crack at Israel Adesanya. Cannonier, who is ranked above him at No. 3, doesn’t believe so. The “Killa Gorilla” thinks he will get the shot if he chooses to sit out.

In an interview with Submission Radio on Wednesday, Cannonier explained the rankings give him the advantage as well as his resume.

“I understand his stance. He’s been doing this for a long time; he hasn’t had his title shot. He was close to his title shot, but he ran into Izzy, but now he is on his way. I don’t think he’s in a position to wait for a title shot, to be honest…If he waits and I wait, I’m getting the title shot first. If you look at the rankings, that’s how it is,” Cannonier said. “I’m ahead of him in the rankings, my resume of who I have beat- the last four guys who I have beat have all been better than who he’s beat.”

“I know he is on a winning streak, but my four out of five wins are better than his five wins.”

The middleweight division is heating up, and of course, we have Marvin Vettori and Paulo Costa, who will be calling for a rematch with the champion if they win. 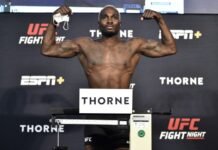