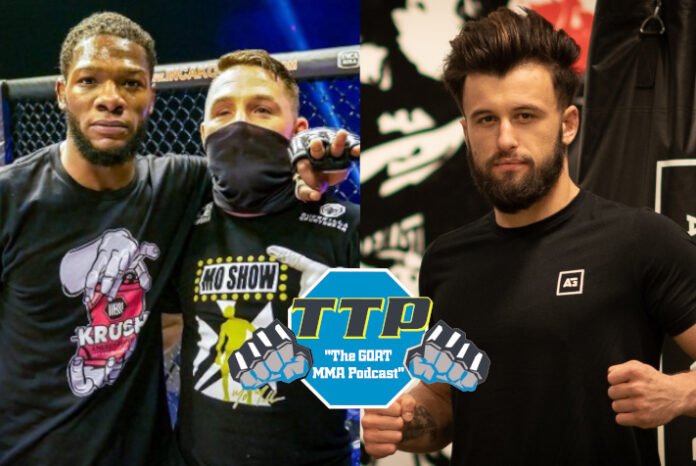 To kick off this week’s show, Manuel Gaxhja pops by. He’ll be squaring off with Chris Duncan during Week 4 of the Contender Series. He talks about that match-up and the experience level of his opponent. Plus, he talks about the unique training journey he’s been on. From his time in his birthplace in Albania, to Greece, and now to the Netherlands – he’s worked to find the best instruction and ways to grow his game as possible. He also shares a bit about his tae kwon do background and the two-year layoff he’s had in between fights. He believes that time away prepared him to take home that contract.

We’re now nearly half a decade into the Contender Series and what better time to look back at everything it has become. Gumby and Shockwave are counting down the best to ever net themselves a contract on the show. While some people might think the top picks are straight forward on this one, there is more than one pick that might surprise you a little bit. Tune in to hear all they have to share on the show that is the best thing to watch on a Tuesday night.

Finally, we end the show by chatting with Mo Miller. Miller fights on Week 3 of the Contender Series against Brandon Lewis. He talks about that fight, and how he feels his exciting style will carry him to a contract. He also shares a bit about how his surroundings have helped prepare him for this moment. He trains out of Strong Style MMA in Ohio along side of some UFC veterans like Stipe Miocic and Aleksa Camur. He talks about how not only have they helped him physically, but how they also helped him get mentally ready for this moment.