Middleweights Darren Till and Derek Brunson meet in the main event of UFC Vegas 36 to take a step toward the title. Cageside Press has its picks set.

Top 10 middleweights Darren Till and Derek Brunson headline UFC Vegas 36. Till has been struggling lately, losing three of his last four fights. However, he is 1-1 since moving up to 185 pounds. Brunson has started putting everything together, winning four consecutive fights since a loss to Israel Adesanya. Till was picked by six of eight writers.

The co-main event features rising heavyweights Tom Aspinall and Sergey Spivak. Aspinall is an impressive 3-0 in the UFC, stopping all three opponents. Spivak has turned things around after a 1-2 start in the Octagon, winning his last three fights. Aspinall was unanimously picked.

Welterweights Alex Morono and David Zawada square off on the main card. Morono is coming off one of the best performances of his career, lighting up veteran Donald Cerrone. Zawada was unable to follow-up his submission win over Abubakar Nurmagomedov, losing a split decision against Ramazan Emeev. All but one writer picked Morono.

Struggling light heavyweights Khalil Rountree and Modestas Bukauskas attempt to get back on track. Rountree has fallen in the two fights that followed the best performance of his career, losing to Marcin Prachnio and Ion Cutelaba. Bukauskas had an impressive promotional debut with a first-round knockout, but has since lost to both Jimmy Crute and Michal Oleksiejczuk. All but two writers picked Rountree.

Highly-touted prospect Paddy Pimblett makes his promotional debut against Luigi Vendramini. Pimblett is 16-3 and notched first-round stoppages in his last two fights to earn a contract. Vendramini is 1-2 since joining the promotion in 2018, winning by TKO against Jessin Ayari. All but one writer picked Pimblett. 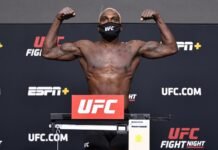