Former Combate Americas champion Jose Alday will be stepping in on five days notice to face Saimon Oliveira on the next episode of Dana White’s Contender Series.

A former Combate Americas (now Combate Global) bantamweight champion will get his shot at the big show as Jose “El Pochito” Alday steps in for Javid Basharat to face Saimon Oliveira on the upcoming episode of Dana White’s Contender Series.  First reported by MMADNA, sources confirmed the bout to Cageside Press, with Alday stepping in on five days notice.

Alday (14-5-1) rose to prominence in 2018 when he upset Contender Series veteran and current UFC fighter John Castaneda in a short notice headliner for Combate Americas.  Alday would quickly become one of the faces of the promotion, being a part of tv spots for Cricket Wireless during broadcasts.  He would go on to defeat promotional veteran and current UFC fighter Gustavo Lopez to win the first championship in Combate Americas history.  Alday most recently fought in May where he picked up a first round knockout over Marcos Lopez.

Oliveira (17-3) is riding a four fight win-streak going into the bout and has fought in promotions such as ACB, Sicario, and Pancrase.  The Brazilian is respected for his skills on the ground with most of his victories coming by submission. 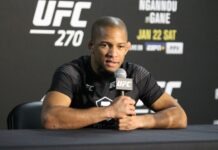 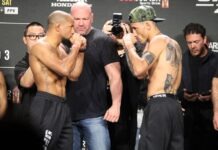