Canadian bantamweight Corinne Laframboise is on yet another trip to the middle east for UAE Warriors 22.

Laframboise (6-4) will be competing in her fourth straight UAE Warriors card, and including her jiu-jitsu career, it’s her fifth trip to the United Arab Emirates. This time out, Laframboise is paired up with Elin Oberg in a flyweight fight that could leave her knocking on the door of the major promotions.

For a fighter who also has a career as a dental hygienist, it was the rush that fighting brings that drew her to the sport.

“I always loved the adrenaline. I think in martial arts, you cannot have a bigger high of adrenaline than that,” Laframboise told Cageside Press in an exclusive interview ahead of her fight this Saturday. “Dental hygiene, I studied in that field for a Plan B or Plan C, but it’s not something driving me. It’s different, but with martial arts I can be a better person every day, just doing more and more. And I like the adrenaline of fighting.”

While pursuing her studies, the Quebec-based fighter had to juggle quite the workload. “At one point at the end, I was working as a dental hygienist during the day, going to my training in boxing, mixed martial arts, and my jiu-jitsu training after work, and after that, I was working at a bar.” All that added up to “a big week of 80 hours working and training.”

Things are a little less crazy these days, but the contrast of two vastly different careers isn’t lost on the athlete. “I can be a nice person as a dental hygienist, and I can be a different type of animal with my [opponents] here.”

Oh course, while she’s promoting good dental health by day, she also runs the risk of knocking her opponent’s teeth out. “Yeah, and I can fix it after!” Laframboise exclaimed. “So I’ll leave her my card, and create some jobs.”

When it comes to UAE Warriors 22 opponent Oberg, Laframboise noted that “I think she’s really quick on her combinations.” The Canadian is ready where ever the fight plays out, however.

While she’s been training all areas of her game and improving her stand-up, the Canadian admitted that “jiu-jitsu is definitely my first love in fighting.”

“It’s more like therapy, doing jiu-jitsu. It’s control of your opponent, and techniques. That’s the reason I started to do jiu-jitsu,” she explained. “One day, I was at a boxing gym, and there was a jiu-jitsu class on the side. There was a little guy of 120lbs who was able to submit a big guy of 200lbs. I was like ‘wow, that’s really nice for a woman,’ because women a majority of the time are less strong than men.” It wasn’t just that jiu-jitsu appealed to her as a woman, mind you. “I like the humility that you can learn, and the self-confidence that it brings, so jiu-jitsu was definitely my first love.”

If Corinne Laframboise gets the win at UAE Warriors 22, she’ll be 4-1 in her last five, with her only loss coming to current UFC flyweight Manon Fiorot, who has turned heads in her new promotion. That bodes well for Laframboise’s own shot at the big time.

“My main goal and my ultimate goal was and will always be to reach the UFC. I want to go in the UFC,” she stated. The Canadian “feels like I’m close,” she added, but before she steps through that door, Corinne Laframboise also sees herself fighting for a title in UAE Warriors. 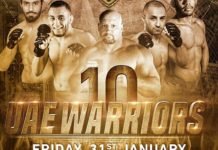