There is plenty of MMA action this weekend, and when it comes to prospects, Friday is going to be a busy, busy night, with LFA 114, PFL Playoffs 3, and Invicta FC 44 all providing up-and-coming talent worth watching.

Maslov is a dangerous athletic striker who has a lot of pop behind his punches. He’s also very fast with his output and overall has good hands with a key uppercut he loves to throw. His takedown defense is a concern but age is on his side and he’s been fighting good solid fighters. Maslov hasn’t fought anyone with a losing record to date. He fights former UFC fighter Luis Henrique (13-6).

Soldatkin is a muscling stocky fighter that moves better than expected. One of his favorite things to throw is a spinning kick to the body. Soldatkin has two submissions and an overall decent ground game. He’s more comfortable on the feet. He throws a lot of volume always throws in twos or more. Along with fluid hands, he has knockout power as well. Not sold on him but he has a lot of attributes a heavyweight doesn’t have. He fights Alex Coruja (10-5).

Outside of his pro debut, his only loss is a split decision in 2018. Ribeiro brings a wild approach slinging wild looping punches. He’s a wild man but with a lot of power in his hands. Not just in his hands as Ribeiro throws thunderous leg kicks as well. Ribeiro is someone you don’t wanna rush in on as he will catch you. Not someone to sit in the pocket and trade with either because his knockout power is dangerous. He fights Marcos del Vigna (4-0).

Souza is a talented young 24-year-old with tons of potential. Souza is an athletic sniper on the outside. He’s very quick and will explode in and right back out before his opponent can respond. Souza throws hard leg kicks and has a textbook front kick to maintain range. He has a good one-two he uses but it’s his kickboxing that’s more impressive. Souza has a good ground game as well. It’s the athleticism and explosiveness that sets him apart. He fights Eduardo Henrique da Silva (7-1).

Khaybulaev is a very solid fighter all around, and he is really technical in his stand-up. He throws a lot of spinning attacks, not overdoing it, but that is a good thing. Khaybulaev uses the flying knee often, which he’s used to knocking out opponents. With that said, he also has good wrestling; he is able to shoot in for a double leg or he can lift and slam you to the mat. Khaybulaev can usually get the fight down multiple times in a bout. He fights Brendan Loughnane (21-3).

Flores is 29-years-old and along with a good amount of fights, he’s fought good competition. Flores is a distance fighter who relies on his excellent distance control. He’s very technical and his shot placement is spot on. Although he’s a talented striker he can wrestle as well. His losses reflect minor mistakes and not just him getting clearly beaten. He fights Carl Deaton (15-4).

3-0 as an amateur, 5-0 as a pro, 6-1 in Muay Thai, and BJJ experience as well, Lewis is someone to watch for. Hope is a good wrestler and can wrestle and use his BJJ the entire fight. Or he can close the distance and knock your head off. He still has to show much more but he’s well-rounded and well-conditioned and that can take him far into his career. He fights Loren Thibodeaux (3-0).

The prodigy of MMA legend Lyoto Machida, Bruno Souza is a solid prospect. Souza mimics the style of Machida with his Karate approach. Souza was a 2015 world Karate champion and a former national and South American champion as well. Being a karate-style fighter, his kicks are his most vital weapon, similar to how a boxer primarily uses their hands. But Souza isn’t only a kicker but in fact a solid striker as well. Mixing in kicks and punches together in combinations is Souza something does extremely well. With incredible movement, his counter striking is very much up to par. Fighting on the outside the Brazilian has long straight very quick hands. As the fight goes on his pace picks up and so does his output. He fights Javier Garcia (7-3).

Low key, Verzosa is one of the best bantamweight prospects out there. Her only loss is to TUF veteran, Invicta champion, and current UFC fighter Julija Stoliarenko. In that fight, both ladies fought in an all-out war resulting in a close split decision. As a pro and amateur, Verzosa is 15-2. She has wins over Katharina Lehner, Kerri Kenneson, and current UFC fighter Shanna Young. She’s been a staple of Invicta FC since 2018 and has lots of memorable fights. She’s only 25 too so the future is bright. Verzosa fights Taneisha Tennant (3-1).

The undefeated Russian is the current reigning ACA champion. Over the last three years, he’s fought and proved himself under the ACA banner fighting nothing but top-level competition. He’s in the running as the best flyweight outside of the UFC. On the feet, Kerefov has good dirty boxing, dangerous kicks, and a laser-accurate straight left. He is as good of a wrestler as he is a striker, and has a gas tank to go five rounds. His takedown defense needs some work but has good grappling and get-up ability. Azamat was very impressive in his last showing. He fights Rasul Albaskhanov (11-4).

Salman has beat very good competition proving he is a top 145-pound prospect out of Russia. If the fight isn’t finished in the first two rounds, Salman has no problem going the distance as he’s done it nine times. Salman is well-rounded and very dangerous everywhere. On the feet, he is an excellent counter-striker and is very effective at kicking the lower calf of his opponent. On the mat, he holds four submissions but really relies on control. He fights for UFC talent Diego Brandão (25-17).

Goncharov is a firecracker of a striker who is super technical. Along with superb boxing skills he has lights out power in his hands. His combinations, output, shot placement, and bodywork is excellent. His hands are sharp and can break guys down during the duration of the fight. He can also stop the fight at any moment when he lands clean. His takedown defense needs some work but it does improve as the fight goes on. Goncharov fights Apti Bimarzaev (17-3).

For pure entertainment value, Woodburn is definitely on the watch list. Woodburn is 5’8″ of pure strength and power. Woodburn trains out of a solid camp in Fusion Xcel Performance out of Ocoee, Florida. In his most recent fight, he knocked out Miles Amos to win the Combat Night Pro middleweight title. Woodburn hasn’t shown nearly enough to suggest he’s a top prospect but he is worth watching. He fights Brandon Johnson (4-1).

Located in Maneadero, Baja California, Mexico, Navarrete is an underrated heavyweight prospect. Navarrete is a chubbier heavyweight but is talented enough to watch out for. The big man is a technical striker with a good jab and a lot of output. Navarrete will march forward throwing his hands and kicks. He’s got that Mexican toughness marching forward taking shots to give some. Not someone that’s going to knock the doors down right away, but he will put on some entertaining fights on the rise up. He fights Ellery Tarazon (0-1). 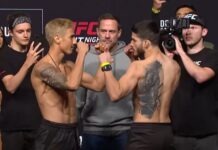