In the main event of Saturday’s UFC 265 in Houston, Texas, France’s own Ciryl Gane walked into enemy territory against Derrick Lewis, and walked out wearing gold.

The asterisk to that comes in that the belt Gane captured is an interim title, and a questionable one at that. Undisputed champ Francis Ngannou appears ready to go in the fall, and considering he last competed in March, creating an interim belt felt like a marketing move at best.

That said, Gane’s win sets up a showdown with undisputed champ Francis Ngannou. The pair reportedly have a bit of bad blood between them, as they’re former training partners.

“This guy [Gane], he’s a big, powerful badass heavyweight who moves like a middleweight. You saw tonight what he was able to do to Derrick Lewis, completely shut him down,” UFC President Dana White said following the event. The punch stats, White noted, were lopsided, in the realm of 100+ to 3 in favor of the Frenchman. “The other thing that impressed me was, I was curious to see how he was going to stand up to the pressure of his first big main event. The crowds, it’s definitely different. And you’re in his [Derrick Lewis] back yard, you’re in his hometown. The guy definitely shined tonight.”

Consider it a successful test run. And White sees a whole lot of fun in the heavyweight division’s future. “We had this fight tonight, now Francis vs. Ciryl. You have Jon Jones out there, 2022. You have Stipe [Miocic] out there too.”

Everything in life is about timing, White later added. “This kid becomes heavyweight champion tonight, and we worked long and hard and spent a lot of money to get France done. And here we are.”

With mixed martial arts now legalized in the European nation, Ngannou vs. Gane could very well happen there. COVID-19 permitting. White isn’t sure when that fight will happen, but suggested “ASAP. We’ll get it done as soon as it’s possible to do.”

The stars aligning for the fight, however, “it’s badass,” White exclaimed. “What I love is, when we were going into this fight, I was telling everybody, and it’s absolutely true, you have two of the best possible heavyweights in the world fighting each other. You have the guy who beat Francis Ngannou, and a guy who’s undefeated, with the whole backstory [of being a former teammate with Ngannou].”

The UFC had been working a long time on getting mixed martial arts legalized in France, he continued. “France is open now, and we just got a TV deal in France. And here we are. What you always want to do when you either build fighters, or build fights, or put on fights, is you want to have the best possible guys fighting each other that you possibly can.” That’s very much the case with the impending title unification fight. “It doesn’t get any better than this. You couldn’t write it, you couldn’t script it, f*ckin’ Vince [McMahon] couldn’t have wrote a better script for this whole thing. It’s beautiful.” 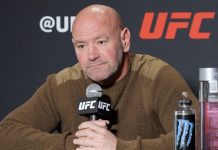