The inaugural UFC women’s flyweight champion is gone from the UFC.

MMA Fighting was first to report that Nicco Montano (6-3) was released from the UFC on Tuesday.

Montano was scheduled to fight Wu Yanan at bantamweight this past weekend at UFC Fight Night: Hall vs. Strickland, but the fight was cancelled when she came into the fight seven pounds overweight. The fight being scrapped is something the flyweight has became accustomed to. Montano saw no fewer than nine fights fall through during her Ultimate Fighting Championship run, many due to her withdrawing, or struggling with her weight cut.

Montano was the promotion’s first flyweight champion, winning the title at the finale of The Ulitmate Fighter Season 26. She defeated Roxanne Modafferi and also won Fight of the Night. Unfortunately, she would compete only once more in the ensuing four years, and never defended the flyweight belt.

The Arizona-born fighter was stripped of her title following UFC 228, after being hospitalized due to a bad weight cut ahead of what would have been her first title defense, against Valentina Shevchenko. The former flyweight champion would move up a weight class to bantamweight a year later. During that time, she tested positive for ostarine and was suspended for six months.

In her bantamweight debut, she would lose a unanimous decision to Julianna Pena. That would be her last fight in the promotion as pull-outs and weight cuts haunted the rest of her UFC run.

In total, she would pull out five fights over a two-year span alone, including bouts with Julia Avila, Macy Chiasson, Karol Rosa, and most recently Yanan.

The night of her UFC release, Montano put out an Instagram video captioned, “Rolling with the punches.” Earlier in the week, UFC President Dana White had suggested that MMA “might not be the sport” for the struggling ex-champ. 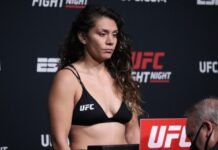 Nicco Montano on UFC Release: “I’m in the Thicc of It,” and “Will Never Give Up on Me” 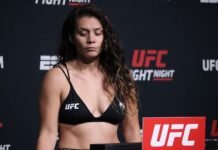 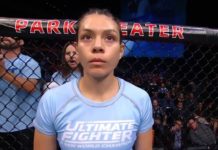