Los Angeles, CA — Khasan Magomedsharipov, the younger brother of UFC star Zabit, made his Bellator debut on Saturday, picking up a win over Jonathan Quiroz.

The 20-year old featherweight improved to 6-0 with TKO victory, putting on a very Zabit-like performance in his first fight outside of Russia.

“He surprised me because I was expecting less from him, but he showed a big heart,’ Magomedsharipov told media outlets including Cageside Press following the fight when asked if there were any surprises from his opponent. Quiroz was not Khasan’s original foe, and he had little time to prepare for the Mexican fighter. “In the second round, he walked out and he looked more fresh than I thought he would be. But he’s like 15 years older than me, I’m still young, and I’ll get better.”

Ahead of the fight, Quiroz was vocal about wanting to fight a Russian, due to the numerous doping scandals the country has been involved in over the years. Magomedsharipov was unaware of those comments, he said backstage at The Forum on Saturday. “Even if I knew that, it wouldn’t effect me, because everyone can say everything he wants, but I know that I’m not a cheater or something. It isn’t anyhow close to me, this kind of stuff. I know people are talking, but it doesn’t have any effect on my performance.”

With a very Zabit-esque performance at Bellator 263, where Khasan looked relaxed and cruised to the TKO finish, comparisons are bound to be made between the two brothers. Khasan Magomedsharipov doesn’t see that as pressure, however.

“It’s not like pressure, but even your opponents, when they see the last name, they start preparing twice as hard, better, because they’re expecting something hard,” he said. “But overall, no, it’s even more like— it motivates me for new goals.” 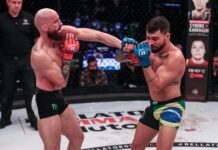