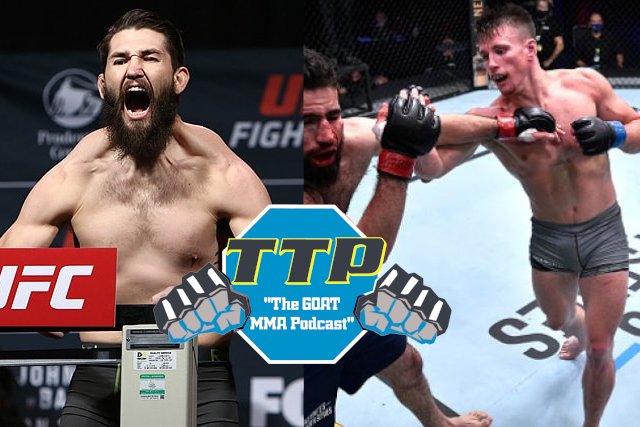 We kick off this week’s edition of TTP with an interview with “Bam Bam” himself. He’s preparing for his fight this Saturday against Jason Witt at UFC Vegas 33, but before we dig too deep into that, he tells us about a wild ride. After taking a seemingly harmless body kick on the last day of sparring, Bryan Barberena tried to drive home to Tennessee. That ride would wind up including crazy stomach pain, temporary blindness, emergency surgery and so much more. Hear it from the man himself as he recounts the craziness that caused him to miss his last fight and then the road he took to get back to the cage.

Gumby and Shockwave could not be more hot right now when it comes to underdogs. They’ve hit in back to back weeks and are adding in parlays that come out in the black as well. So which dog do they have cooked up to make your wallet fat this Saturday, you’ll have to tune in and find out.

Plus, they also give you a rundown of some of their favorite main card fights on UFC Vegas 33. The co-main event may have changed a whole bunch of times, but they’ve still got the info you need to make sure you’re not missing something.

Closing out this week’s episode is Collin Anglin. After winning his contract in an exciting fight on the Contender Series, Anglin is now poised to make his debut this weekend at UFC Vegas 33. He gets into his matchup with former kickboxer Melsik Baghdasaryan and how he sees his hand getting raised. Despite all of the wrestling that Anglin has done in his life, he may actually favor a striking matchup in this one. Listen to find out why.