Speaking to Cageside Press in an exclusive interview ahead of the fight, Gonzalez (6-0) gave his take on the match-up — and noted that it’s the sort of challenge he’s been asking for all along. “He’s a veteran, he’s spent most of his career with Bellator, like myself to a degree. Obviously he’s got over 30 fights at this point, so he’s got a few more under his belt than I do.”

As far as how Gonzalez sees the fight going, he sees himself relying on his “physical superiority, the striking, my speed, my strength, my movement, and just kind of picking my shots and waiting for an opportunity to present itself to maybe take him down.” Though maybe not, added Gonzalez. “Maybe we just keep this thing on the feet. I feel like I have the ability to dictate where the fight goes.”

After all, he continued, Yamauchi is “a high-level black belt, and I respect the hell out of his jiu-jitsu game, so I won’t be overly aggressive or overly committing to anything. The last thing I want to do is give him an opportunity to sweep me or lock something up. I can see myself winning this fight in a few different ways, but you’ll have to tune in next Saturday to find out.”

This is exactly the sort of challenge Gonzalez has asked for throughout his run with Bellator. Take a look at his record, and it appears Gonzalez is on the fast-track at welterweight: fellow prospect Vladimir Tokov, veteran Roger Huerta, and now #5 ranked Yamauchi. But Bellator hasn’t just been giving him those challenges, he’s requested them.

“A lot of that was because that’s what I’ve been telling Bellator I wanted. I don’t think they’ve given me anything more than I asked for,” Gonzalez explained. “I’ve continually asked for better competition and high-level fights, because I see myself as a high-level competitor as well. I train with some of the best guys in the world at Team Alpha Male, and I’m ready. Mentally, physically, all-around, I’m ready, and I’ve risen to the occasion thus far.”

So far, the success has been there, with six wins in six fights. Saturday’s showdown with Yamauchi is wrestler versus grappler, and Gonzalez appears both confident, and aware of the danger his opponent poses.

“Being a wrestler, I get to dictate where the fight goes. But I’m not one of those wrestlers who’s going to go down there and just kind of spazz out and let him lock something up,” Gonzalez said. “I’m a very calculated, intellectual grappler for the most part. I think my first fight for Bellator, I allowed the guy to lock something up, and ever since then, I’ve been a lot more alert and aware of the threat a jiu-jitsu guy can pose from the bottom position.”

A silver medalist at the 2017 U.S. National Championships in Greco-Roman wrestling, Gonzalez has made a successful transition to MMA thus far. In terms of how traditional wrestling differs from MMA wrestling, there’s one key area, he explained.

“There’s a ton of similarities, mostly the only difference is just finding your safe entries to those wrestling positions,” Gonzalez opined. “Being a Greco-Roman guy, I feel like the transition was a little bit easier. Greco-Roman wrestling, our stances are a little bit more similar to a fight stance, compared to folkstyle or freestyles wrestling.” 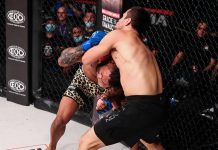 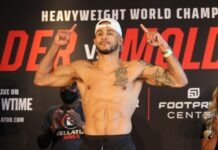 Bellator 283: Chris Gonzalez Sees Himself As “Better Dog” in Dogfight with Usman Nurmagomedov