UFC Vegas 32 saw more than a couple questionable decisions, each of which could have some pretty serious implications in their respective divisions. As a result, sussing out precisely what will come next for each of these guys/gals is far from cut and dry. Nevertheless, that’s precisely what I’m doing for you today with the main card winners from Saturday night.

Whether you scored it three rounds to two for Dillashaw or Sandhagen, everybody has to agree that the fight was razor close. A really solid performance for both men likely drove both of their stock way up. With the win, Dillashaw seems poised for a title shot. However, I’m a tad worried about the layoff it might take to get that fight. After all, Sterling/Yan 2 is scheduled for October. Should that go off without a hitch, you have the concern of an injury to the winner and/or the odd chance that a weirdly close fight that Yan wins could end in a trilogy. In either of those scenarios we would likely see Dillashaw waiting close to a year for another fight after taking 2.5 years off for his EPO suspension. I think it would behoove him to snag another fight in there to work out some things. If so, a number one contender fight with Rob Font is the one I’d like to see.

After taking an early onslaught from their respective opponents at UFC Vegas 32, Raulian Paiva and Adrian Yanez stormed back to take victories. Each of them showed some flaws in what happens when they let an opponent turn up the pressure on them. Similarly, each of them showed how dangerous they can be when they turn the pressure up on their opponents. With both of them knocking on the door of the top 15, perhaps we just pair them and their issues together. It would definitely be exciting and give one of them a solid claim for a top 15, or even a top 10, opponent.

Their Next Fights: Each other

Darren Elkins put on a very Darren Elkins performance at UFC Vegas 32. After taking a beating in round one, he flipped the script and showed why they call him “The Damage.” Elkins said he’s ready for more fun fights afterwards, which is a little obvious since he’ll be in them. However, to make sure we maximize the fun, I like a bout with Charles Rosa. Rosa will push that grappling style and get in Elkins’ face. He’s also very composed compared to some of Elkins’ former foes. That could make it even more interesting as he gets in to deep waters with one of the best swimmers.

Perhaps the most egregious set of scorecards at UFC Vegas 32 led Maycee Barber to her first win in three fights. After being controlled and out-struck in each of the first two rounds, she somehow edged out the decision. The UFC already seemed to be booking her like she was on a win streak, despite the losses, so they must still be high on her. There’s no reason to move her up the rankings with her next pairing, in fact I think she could use to take a step back. If that’s the case, but the UFC still wants to provide her a marquee name to boost her brand, Antonina Shevchenko would fit the bill. She has the Shevchenko name, but sits just outside of the top 15 with alternating wins and losses. 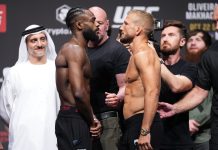 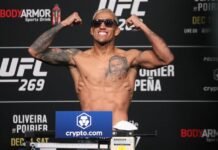