Islam Makhachev resumes his climb toward the top of the lightweight division when he faces Thiago Moises in the main event of UFC Vegas 31. Cageside Press has its picks set.

The main event of UFC Vegas 31 puts the hot streak of Thiago Moises to the test against the recently unbeatable Islam Makhachev. Moises has bounced back from a 1-2 start to his UFC tenure with wins over veterans Michael Johnson, Bobby Green, and Alex Hernandez. Makhachev lost in his second Octagon appearance back in 2015, but has won his seven fights since with four stoppages. Makhachev was unanimously picked.

Former bantamweight champion Miesha Tate returns from her nearly five-year retirement tonight, but is still 10 years younger than her opponent Marion Reneau. Tate was not able to defend her belt, falling to Amanda Nunes and Raquel Pennington before retiring in 2016. Reneau had a four-fight unbeaten streak that stretched into 2018, but she’s lost four fights since. All but one writer picked Tate.

Veteran Jeremy Stephens faces up-and-comer Mateusz Gamrot. Stephens, who has been with the promotion since 2007, is winless in five fights since 2018 (one being an abrupt no contest against Yair Rodriguez). Gamrot bounced back from a competitive loss in his promotional debut with a second-round stoppage against Scott Holtzman. Gamrot was unanimously picked.

Rodolfo Vieira looks to bounce back from his disappointing loss when he faces Dustin Stoltzfus. Vieira, a multiple-time jiu-jitsu world champion, had stopped all seven opponents in his career before getting submitted himself by Anthony Hernandez. Stoltzfus will be looking to erase a debut loss to Kyle Daukaus tonight. Vieira was picked by eight of 11 writers.

Opening up the UFC Vegas 31 main card is Gabriel Benitez vs. Billy Quarantillo. Benitez recently stopped a two-fight losing streak with a first-round finish against Justin Jaynes. Quarantillo had an eight-fight win streak (three in the UFC) stopped in a decision loss to Gavin Tucker. Quarantillo was picked by eight of 11 writers. 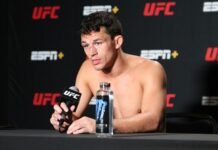 UFC Vegas 31: Billy Quarantillo Says After One More Fight, He Can Call Out Top 15