The UFC has announced that International Fight Week will take place in September this year, capped off by UFC 266.

During Saturday’s UFC Vegas 31 broadcast on ESPN, promotion officials announced that the annual event would run from September 21 through the 25, culminating with the UFC 266 card. That card boasts two title fights, with Alexander Volkanovski vs. Brian Ortega for the featherweight championship in the main event slot.

In the co-main event, Valentina Shevchenko defends her women’s flyweight championship against Lauren Murphy. Also featured on the card, the return of Nick Diaz, in a five-round rematch with old rival Robbie Lawler.

The UFC also confirmed their plans in a press release circulated immediately following the announcement.

As part of the International Fight Week festivities, which generally take place in July, the UFC will host its annual Hall of Fame ceremony. That ceremony will be held on Thursday, September 23, though no inductees were announced on Saturday.

Also taking part in this year’s International Fight Week will be a two-day UFC Fan Experience that will feature meet and greets, autograph sessions, and other activities. This free fan experience will run across September 24 and 25. A number of UFC stars including Hall of Famers and active contenders are expected to take part. 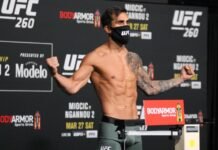 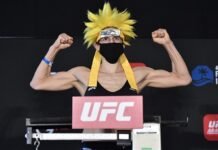 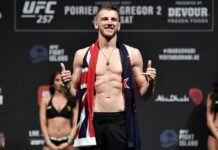