The UFC bantamweight champion met with reporters backstage at UFC 264 in Las Vegas over the weekend, and explained that things were “night and day” after he underwent neck surgery earlier this year to address a condition that had plagued him since college.

“In terms of waking up, having pain standing, sleeping, driving, training, and doing adult activities at night — yeah, it wasn’t fun,” Sterling explained to media members at the T-Mobile Arena. “But now, it’s night and day. As soon as I had the surgery, I woke up, it was like I said, night and day.”

Surgery behind him, Sterling has begun the recovery process and is looking ahead to his first title defense. “I was thinking November, December. November in MSG [Madison Square Garden in New York], December in Las Vegas. But I saw Dana White did some interview somewhere, I don’t know even know where it started, but he said October 30 in Abu Dhabi.”

That’s a timeframe Sterling is on board with, although the locale leaves something to be desired. “I like the date, I don’t mind it, because I want to fight sooner to shut everybody up — ‘oh you need more time, oh you need more time’ — bro I just had neck surgery, what are we talking about?” he exclaimed. “But Abu Dhabi, not so great. Obviously Petr Yan is training here in Florida as well, in the States, so it would be nice for both of us to fight in the States, I’m pretty sure he would agree. But if we have to go across the sea, across the bond, I’m okay with that as well, so we both have to deal with the same thing and make those adjustments.”

The travel and time difference are concerns, but the number of training partners he can bring with him, and the actual timing of the fight, are additional wrinkles as well, said Aljo. “That’s pretty much it. I just want to fight, shut this guy up, and just be done with it and move on.”

There’s been all sorts of baggage with the bantamweight title win Sterling had this past March. Sterling was down on the scorecards against Petr Yan when the Russian landed a blatantly illegal knee on his opponent. Sterling was unable to continue, and for the first time in promotion history, a title change hands due to a DQ.

Sterling wants everyone to realize that “I didn’t get here my mistake, I didn’t fall out of the sky and just jump into a Dana White-privilege opportunity to fight for a world title, and get gifted with a guy stupid enough to become champion and not know the rules,” he stated Saturday. “That’s on him, that’s not on me. He had a layup, that was the worst performance that I can remember in a very long time, and he had a slam dunk to bring it home and solidify it and shut up all the critics for himself, because he never fought no one in the top five. I fought three guys in the top five and beat them all! But I’m the paper champ?”

“It’s ironic,” continued Sterling “but at the end of the day, I think this is a blessing in disguise. I feel good, I feel healthy, and I can’t wait to just remind the world that what I’ve done was no accident, and what he’s done, he got here with the Dana White privilege, and I can’t wait to shut him up.”

From the sounds of things, Sterling will get his chance in October.

Watch the full media appearance from Aljamain Sterling at UFC 264 above. 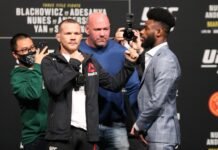