Newcomer Jeremiah Wells was the lone debuting fighter at UFC Vegas 30 on Saturday. Stepping in on short notice against TUF Brazil’s Warlley Alves, Wells, 34, had been expected to make his octagon debut last year. But when that fell through, he was forced to wait — right up until Ramazan Emeev was forced out of the fight.

Alves was a tough draw for a first UFC fight, and Wells appeared to be in for a war on Saturday. But he handled it like a seasoned pro.

Wells, like he’s done his entire career, bull rushed forwards and shoved Alves to his back to start. Wells eventually let Alves back to the feet and stung him with a few shots on the way up. He kept aggressive on that body lock but eventually separated. When separated Wells was swinging for the fences but Alves was never in his preferred range. Wells went back to the clinch and Alves pulled guard for a guillotine. He didn’t complete it but ended the round on top.

Round two saw Wells catch Alves with a right hand early, dropping him. He followed up with a flurry of punches and it put the Brazilian out cold. 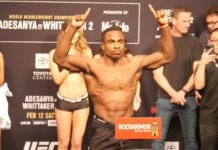