A pair of UFC middleweights will look to snap their losing streaks in October.

Somos MMA Podcast was first to report the news that Jaime Pickett will fight Laureano Staropoli on October 9 at a yet-to-be-announced UFC event.

Pickett would confirm the booking on his Instagram, writing, “October 9th! I can’t wait to get back in there and make this sh*t right. Let’s goooo!”

Laureano Staropoli (9-4) is on a three-fight losing streak at the moment. He lost to Muslim Salikhov in 2019 and Tim Means in 2020. Most recently, he dropped a fight to Roman Dolidze in a very underwhelming bout that resulted in some bickering back and forth after the bell.

Pickett (11-6) is looking to get his first UFC win. After receiving his UFC contract on his third attempt fighting on Dana White’s Contender Series, “The Night Wolf” would make his UFC debut in December but lost a unanimous decision to Tafon Nchukwi. Last month at UFC 262, Pickett was finished by Jordan Wright in the first round.

Both men desperately need a win and the loser of the fight could see themselves going back to the regional scene.

No location, venue, or broadcast details have been announced by the promotion for the October 9 UFC event. No main event has been announced as of yet. 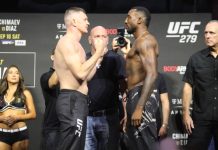