BKFC 18 offered a little something for everyone.

The title fights came at heavyweight, 205lbs, 175lbs, and 155lbs. In the main event, it was Joey Beltran set to defend his heavyweight title against Sam Shewmaker. Hector Lombard and Joe Riggs, both well-known names to UFC fans, would anchor the co-feature, with 205lb gold on the line. Luis Palomino put his 155lb belt on the line opposite Tyler Goodjohn, while Thiago Alves, another well-known name to UFC fans, threw down with Ulysses Diaz for the vacant 175lb belt.

BKFC 18 was set to go down live at the Seminole Hard Rock Hotel and Casino in Hollywood, FL on Friday, June 26. The action airs live on PPV via BKTVAPP.com

Check below for full results. 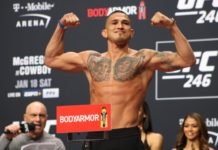