Sidney Outlaw returns to the Bellator cage this Friday at Bellator 261, and he says he will reintroduce himself.

Outlaw (15-4) only fought once last year in 2020, marking his least active year since he was an amateur back in 2011. While he did give his body a rest last year, he said that he needed to change his body.

“I can’t even necessarily say I fully rested last year during the craziness because I literally had to change my body. I had a lot of health problems, and on top of that, I was getting into, like, cutting weight the right way. So, I wanted to change my body the right way, and it was a lot of experimenting, you know,” Outlaw said in an exclusive interview with Cageside Press. “But I definitely wanted to be active, you know, I fight. It is what I do.

When asked what injuries he had to deal with, he said they weren’t the normal injuries that you go to the doctor for.

“Yeah, so, the injures weren’t specific or anything like that. Like I didn’t break my leg or something like that. I was finding out more things about my body that I probably should have been doing for a while. Back in the day, when I was training and fighting, you know, I didn’t really have health insurance,” Outlaw said. “I was like, the best of the best for a long, long time, and I was fighting all of the best-ranked guys for a long time. So when Bellator finally put me on, I was finally able to get my body looked at, and I was like, ‘Oh snap!’ So I figured to take this time, to have my body looked at, get some rehab in. I might as well, you know, get my blood all good.”

Outlaw faces No. 4 ranked Myles Jury on Friday. He liked the matchup when it came across the table, but he wishes it was the main event because, with their last names, you should really market it.

“Myles is a good name, and he is ranked above me; that’s all that I could ask for. Well, actually, I wish it could have been the main event. I could see it now- Outlaw & Jury. Someone told me it was ironic because of Jury and Outlaw, but I thought it was cool. Just a missed opportunity on their part, you know,” Outlaw said.

As for the fight itself, Outlaw says that this was one of the best camps of his life, and Jury better be careful. Of Outlaw’s 15 wins, he has eight stoppages.

“Oh man, with how this camp went, I’m going to go out there and act like an outlaw. You know, outlaws take anything. I will take anything that’s given to me, or you know, I will take it by force, so don’t put it there. Don’t show me. Don’t tell me you have anything because I will take it from you,” Outlaw said. “I mean, I was fighting at 70% my whole career; I bumped that up. I want to properly reintroduce myself to the Bellator and the fanbase. Like, this is my debut all over again.”

With a win over Jury this Friday, Outlaw has a chance to bump up to spots and grab his No. 4 ranking. However, he won’t believe it until he sees it because he says the rankings can ruin his day if he focuses on it too much.

Outlaw also had a message for Instagram. He said that he has been fighting for over 10 years but can’t get verified. Because of this, he goes by Sidney ‘Unloved’ Outlaw on his Instagram profile.

“I’m one of the best fighters on the planet and can’t even get verified. It is like pulling teeth, apparently. I’m not getting that love or respect that I think I deserve; you know what I’m saying?  Bellator treats me right, so screw it. I’ll just go by Unloved on Instagram because obviously, that’s what’s going on,” Outlaw said. 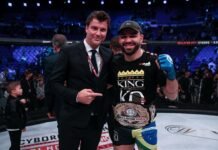