Glendale, AZ — After losing her first two UFC fights, Pannie Kianzad is now on a four-fight win streak and eyeing Raquel Pennington, who she was matched up with at one point in the past.

During her UFC 263 post-fight media scrum, Kianzad told Cageside Press about how she turned her UFC career around.

“Well, The Ultimate Fighter was my chance to get a UFC contract, but it just wasn’t my time. It wasn’t my time; it wasn’t my weight class; it was just not me. My opponent was better than me that night. I got sent home without a contract and, I was pretty down for a while, but I fought again. I got a chance to fight at bantamweight, and I took the fight on two weeks’ notice, which I’m not regretting. I fought Julia Avila, and she was way better than me that night; she was better prepared,” Kianzad said.

The UFC has not regretted it. Kianzad has won four straight and will be breaking into the top 10 and will most likely getting a top-five opponent next.

As for who, Kianzad asked for a former title challenger and someone to whom she was previously linked, Raquel Pennington, who was suspended earlier this year.

“Well, we were scheduled to fight tonight, and I don’t know why it didn’t happen. I think she said she can go in August, and I can get cleared in August. I would love to fight in August if she wants to,” Kianzad said.

The Iranian-born Swedish fighter believes she is a top-five fighter now and will look to take Pennington’s spot at the top of the division. 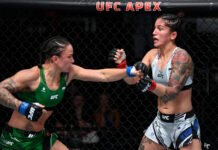