An intriguing welterweight showdown has been set for UFC 265 in August.

Sources have confirmed to Cageside Press that Michael Chiesa (18-4) will take on Vicente Luque (20-7-1) at the August 7 event. Both fighters are currently riding solid win streaks in the 170lb division.

Chiesa in particular has found new life at welterweight. Since moving up from 155lbs in late 2018, he has posted a four-fight winning streak with victories over Carlos Condit, Diego Sanchez, Rafael dos Anjos, and Neil Magny. For those keeping score, that’s a former interim champ, a TUF winner, a former champ, and a top contender.

In his last bout, Chiesa earned a unanimous decision win over Magny, snapping Magny’s own three-fight winning streak in the process.

Vicente Luque has had similar success of late. The Brazilian will enter the bout off a win over ex-champ Tyron Woodley back at UFC 260 in March. Prior to that, he had strung together wins over Randy Brown and Niko Price.

UFC 265 does not yet have a venue or location announced. The PPV card currently features the following reported bouts: 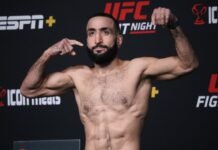 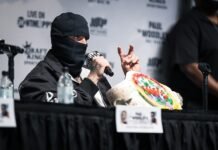