Here are a few of @PhenomLima's top finishes from inside the #Bellator cage.

See him LIVE in action as he defends his title at #Bellator260 on Friday, June 11th when you snag your tix at the link below. 👇

Last October, the story was that Douglas Lima dared to be great against Gegard Mousasi.  “The Phenom” came up short that night, but that should not change the narrative that Lima already is great.  Survey the history of Bellator and you’ll find less than a handful of their homegrown talents have ever had a greater resume.  A part of the organization since 2011, Lima has fought every welterweight of note to ever go through the promotion.

In 2019, Lima’s run in the welterweight Grand Prix saw him cut through former champion Andrey Koreshkov, get a Knockout of the Year candidate over previously undefeated Michael Page, and shut-out reigning champion Rory MacDonald to regain the title.  If there is one thing to lament about his success in recent years, it is that he has been overshadowed by one of the most competitive eras in his weight class taking place at the same time in the UFC.

That 💪 Brabo Choke though. 👀

If you haven’t heard of Yaroslav Amosov before, you’re not alone.  But you should know there’s a good chance everyone will know who he is by Saturday morning.  The undefeated 27 year-old from the Ukraine was forced to withdraw from an alternate bout with Lorenz Larkin for the Grand Prix in 2018.  Instead of getting to raise his stock considerably, he was on the outside looking in as Lima, Page, MacDonald and others stole the welterweight headlines for the better part of the year.

Behind an impressive wrestling attack, Amosov surged to a 19-0 start for his professional career while competing primarily in Russia and in his native Ukraine.  In 2018, Amosov was signed by Bellator and continued his dominance in defeating UFC veterans Gerald Harris and Erick Silva.  The former Sambo champion would go on to add Ed Ruth, David Rickels, Mark Lemminger, and fellow unbeaten Logan Storley to his resume to earn a shot at the title with a perfect 25-0 record.

Stylistically, Lima should look to be the aggressor and force Amosov to fight off his heels.  While the champion is a complete mixed martial artist, his grappling off of his back is not up to the level of his striking so he must make Amosov weary of closing the distance.  Keeping the challenger with his back close to the cage will be the best way to accomplish this.  Amosov by comparison should work behind a sharp jab and look to throw with high volume against the slower Lima.  Doing so will give him the best opportunities to hide his takedown attempts and get Lima to the mat.

YOU DON’T WANT TO MISS THIS!

The winner will likely have their choosing of two surging top contenders.  Most prominently there is Michael “Venom” Page who rides a five fight win-streak with four finishes going into the bout.  The other option is former UFC veteran Lorenz Larkin who is on a five fight win-streak with wins over former champions in Andrey Koreshkov and Rafael Carvalho.  Both are former foes of Lima and both would be new match-ups for Amosov. 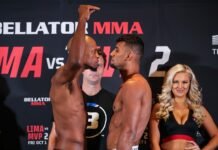