After going 4-0-1 as an amateur, Jerald Spohn (1-0) made his professional debut this past weekend at CFFC 96.

Kicking off the main card on UFC Fight Pass, “The Neon Don” faced off against Nick Olson and ended up submitting him via rear-naked choke with 10 seconds left in the first round.

With 10 seconds left in the round! #CFFC96 pic.twitter.com/u1Z40YicHw

Spohn looked dominant, and with his collegiate wrestling, he can be a real threat in the welterweight division. While just about everyone thought he had a picture-perfect performance, Spohn was still critical.

“I give it an eight [out of 10]. I, you know, went out, and as far as executing the game plan, and doing what had to be done, I was flawless,” Spohn said in an exclusive interview with Cageside Press. “I went out, hit him a few times on the feet, and then he tried to clinch up with me, which was an interesting choice by him. But I took advantage of it, got him to the ground, and kinda operated on the ‘inch into a better position and cause damage.’ There are some things I saw that technically I could have done better, things that could have made my life easier, maybe even make the fight a little shorter. But yeah, I couldn’t ask for much more. I did a great job, and I’m very proud of myself, but I’m also critical of where I could have been better.”

As for what is next for “The Neon Don,” it is only a matter of time before a big promotion scoops him up. Before he makes it to the UFC or Bellator, he said he needs and wants a few more fights.

“Humbly speaking, I could use three more fights before being picked up by the big show. Maybe two, you know, who knows, it just depends. It’s not so much about the fights but about the development in the gym,” Spohn said.

Spohn did have a message to his future opponents who think he is a one-round fighter, as he has five first-round finishes – dating back to his amateur days.

“I’ll tip my hat to anyone who can go three rounds because I’m going to bring the pressure. That’s what I’m about. You know, guys are going to fold. So, you can be a very skilled guy, but unless you get me out of there quick, like, I’m going to make you fold at some point,” Spohn said.

Check out the full interview above where Jerald Spohn talks about his fight, growing up a redhead, his nickname, his stand-up comedy, his future, plus so much more. 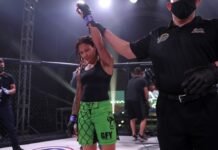 CFFC 96: Jones vs. Cleveland — Three Fights To Look Out For