Surging prospect Kyra Batara is looking to pick up where she left off in her newest chapter as she makes her Bellator debut on June 25 against Lena Ovchynnikova.

The last time you saw Kyra Batara, the 25 year old upstart was one of the top prospects of Combate Americas, now Combate Global.  After an undefeated run in their cage and even representing the promotion during a cross-promotion event with RIZIN, the general consensus was that “Mogwai” would be going on to fight for the inaugural women’s title in late 2019.  After being front and center on television and headlining events for year, it was a surprise when the company elected to part ways with Batara who has not fought since.

Combate cut me and it broke my heart. Like I had been fighting with them since I was 21. I was on six win streak with them. Everything was great. So I did not understand why they would cut me, like it just made no sense. And it put me in a position where I was like, is this really what I want to do? Is it worth it? I’ve had three concussions in one year. I’m putting my body on the line for what? For people that think I’m just a dollar sign? And when they’re done with me, they’re done with me? Like, is this worth it to me? So I had to really do some soul searching. And for me, I needed the time off.

Time off for injuries is not something the Las Vegas native has shied away from.  A back injury kept her out of action between 2018 and 2019 and she exercised caution following concussions stemming from her fighting career.  That’s not to mention the added element of the coronavirus pandemic that halted most regional shows across the world.  Batara was left in the no-man’s land of up-and-coming fighters that were stranded without fights as there were fewer shows to build one’s name.

Taking a leave of absence from competition and seeking a new venture amid the changing world, Batara found an outlet in joining the growing number of public figures who made exclusive content on a fan site.  A peruse of her social media will tell you that she manages multiple sites, including one that posts mature content.  It is a path less frequently traveled, but it is one that Batara says has changed her life.

It’s like anything. If you don’t experience it for yourself, you’re not going to know, you can ask the person but everyone’s different. Everyone has different ways of how they put out their content, how they talk to people. For me personally, it was a way for me to connect with fans that I was actually getting paid to talk to them versus going through 1000s, literally 1000s, of DMS. And so not only do I get to have more intimate connections with people that are supporting me, but they get to see my life through no filter. I found a new love for my body. I’ve met the most amazing people doing this, teaching classes because I excelled so fast in it. I’ve always been a business woman first. I just took the platform as a new way to make money without having to work a nine to five which I was refusing we were in quarantine. So what else was I gonna do? And I just fell in love with it…I’ll put it this way, my ex left me and $10,000 worth of debt. I had a brand new car. I was living in a one bedroom apartment. I had $20 to my name, pre-quarantine. And this past year, I paid off my car paid off my debt. I bought a house, I bought a dog. I left my ex and I’m living alone and paying all the bills by myself.

So, how does Batara now find herself back on the big stage, with a marquee fight for the world’s second biggest promotion?  According to Batara, it was an opportunity manifested from the desires she put out into the universe.

“I ran into one of my friends that I got certified with for personal training years ago and he’s like, ‘Yo, are you fighting? I want to see you in the cage.’ And I looked at him and I go, ‘if the right opportunity presents itself off.’ And he’s like ‘No, f*** that.’ And I was like, ‘What? What do you mean?’ And he’s like, ‘No, you’re a fighter through and through. If you want to fight then tell yourself: I’m going to fucking fight.’ And the next day, I made an Instagram post, and I was like, ‘Look, guys, I’m ready. I’m gonna start fighting again.’ The next day is when I got the fight call. And I was like, what is happening? I really just spoke it into existence. And that was that that was a wrap.

As an athlete who began competing in her teens, Batara says that getting back into the grind of actually training for an MMA fight has not been difficult.  Notably, her opponent Lena Ovchynnikova is also returning from a similar layoff.  Batara recognizes that “Hunter” possesses formidable skills on the feet but questions how the former flyweight will handle the cut down to 115 pounds to make the strawweight limit.

Claudia (Gadelha) and I were talking and she’s like, ‘do you think she’s gonna make weight?’ And that’s the huge question. We’ll see. She’s training over at Jacksons right now. So she’s definitely getting her cardio in.  I think she’s got amazing striking. I just think that I’m the better MMA fighter. I think that I’m going to take her down and submit her. 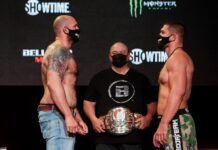