A pair of top ten ranked heavyweights will collide in July.

Al Zullino of BJPenndotcom was first to report that No. 7 ranked Shamil Abdurakhimov will fight No. 10 Chris Daukaus on July 24 at UFC Fight Night: Sandhagen vs. Dillashaw. A source close to the situation subsequently confirmed the booking to Cageside Press.

Abdurakhimov (20-5) has been out of action since his loss to Curtis Blaydes at UFC 242 in September 2019. The Russian fighter was linked with Ciryl Gane several times in 2020, but the fight never materialized. He was scheduled to return against Augusto Sakai in May, but again, travel axed him from competing.

Daukaus (11-3) has fought three times since his opponent has. The Philadelphia police officer burst onto the UFC scene last year in August with a first-round stoppage of Parker Porter. He would return two months later and knockout Rodrigo Nascimento in 45 seconds. Most recently, Daukaus stopped Aleksei Oleinik in the first round and snatched his ranking in the process. Daukaus is riding a four-fight win streak, and he has received Performance of the Night in his last two fights. 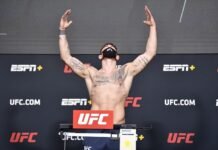 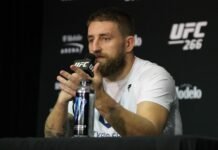