After both women had fights canceled this year, Erin Blanchfield will finally make her UFC debut, while Sarah Alpar will look for her first UFC win.

MMA Junkie was first to report the news that Blanchfield will be making her UFC debut against Sarah Alpar at UFC 266 on September 4. A source close to the situation later confirmed the fight to Cageside Press.

Blanchfield (6-1) was supposed to make her debut in April; however, opponent Norma Dumont missed weight so badly that the fight was scrapped. Heading into her (new) debut, Blanchfield is riding a three-fight win streak, and her only loss came from UFC fighter Tracy Cortez in 2019. The 21-year old had two wins in 2020, knocking out Victoria Leonardo with a head kick and then defeating Brogan Walker-Sanchez via a unanimous decision. Blanchfield was scheduled to face Pearl Gonzalez for the vacant Invicta FC flyweight title last year, but a positive COVID-19 test halted that.

Alpar (9-5) was supposed to fight this weekend, but both her opponent pulled out of the fight, forcing her to wait for another fight. “Too Sweet” was unsuccessful in her UFC debut when she was left a bloody mess three weeks before her wedding by Jessica-Rose Clark last September at UFC Fight Night: Covington vs. Woodley. The loss snapped her three-fight winning streak that included a contract-winning performance on season four of Dana White’s Contender Series.

No location, venue, or broadcast details have yet to be announced by the promotion for UFC 266, but it will be headlined by Jan Blachowicz vs. Glover Teixeira for the light heavyweight title. 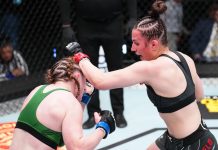