Valerie Loureda entered Bellator 259 looking to improve to 4-0, and shake criticism that she was more model than martial artist. Despite three wins under the Bellator banner, her social media activities frequently overshadowed her fight career — but an opening round knockdown of Hannah Guy was a clear reminder that pretty girls can punch hard.

Guy recovered from the blow, a left hand, but ate another crisp punch moments later, and was clearly shell shocked. Loureda circled on the outside, and easily shook off a takedown attempt. When Guy again changed levels for a takedown, Loureda easily reversed, though she had to contend with an arm-bar attempt. The submission looked tight, but Loureda was able to roll with it and battle her way free before getting back to the feet.

Despite surviving, the sequence may have been one of the toughest tests of Loureda’s career to date. She’s finish the round with a spinning kick, and end up on top just before the buzzer.

That tough test would continue as the fight wore on. Guy, in her Bellator debut, proved she was far more than cannon fodder brought in to prop up a promotional darling.

Round two had Guy looking for the takedown early, but Loureda quickly got on top. Guy rolled, however, taking the dominant position. Loureda tied her opponent up, but Guy moved to mount, dropping ground n’ pound. Elbows followed as Guy trapped Loureda in a triangle — but Loureda worked her way free, getting back on top. But Guy soon locked on with another arm-bar attempt, which Loureda gutted her way out of. When they got back to the feet, Loureda landed a spinning back fist that caught Guy. Not long after, she would land another.

Through two rounds, Valerie Loureda had faced the most adversity she’d seen in her career to date. And while she’d had her moments, mainly on the feet, there was little question she’d been outfought at times. Early in the third, Guy jumped into a guillotine, but Loureda escaped and wisely backed off. Guy would press her up against the cage; Loureda reversed and landed a couple of solid punches and Guy went to her back. Having wisely corrected her game plan, Loureda ensured she stayed standing, forcing Guy to contend with her striking. Guy would continue to try to force takedown attempts. None would land until a poorly timed spinning attack from Loureda, which resulted in Guy charging forward at just the right time, planting Loureda on her back with a body lock takedown. The pair would end the fight there, and Guy would earn the distinction of being the first fighter to defeat Valerie Loureda. 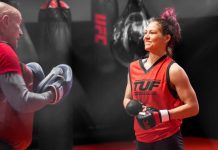